Link to this page: https://www.socialistparty.org.uk/articles/23307 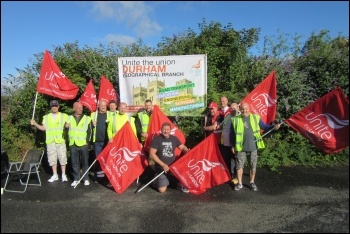 Shopfitters from HMY Radford in Burnopfield (Tyneside) are on a three-day strike, starting Wednesday 3rd August. This strike, alongside a 24-hour stoppage in July, is the first strike action at this factory for 33 years.

One of the strikers explained: "At the end of the day the dispute is about pay, conditions and fairness". Another said: "What we are asking for is pennies!"

The shopfitters had asked for a 33p an hour increase each year over the next three years, which would take them to just below the living wage of £9 an hour which is to be introduced by 2020. The company flatly refused to do this.

Strikers also commented that their wages had already effectively been reduced by around £1,800 a year 18 months ago when their shift patterns were changed.

Workers told of the 'penny pinching' methods of the company, and how the managers 'keep changing the rules to suit them.' This year is a leap year, but workers were told they wouldn't be paid for the extra day as they are salaried!

Strikers told us the company likes to make out that 'we're all in this together'; everyone at the factory wears the same uniform. However, when it comes to things like hospital appointments, office staff are given paid leave, whereas the shopfitters have to take the day off as a holiday or without pay.

The shopfitters are clearly angry, but also determined to fight for a decent pay rise and better working conditions.