Link to this page: https://www.socialistparty.org.uk/articles/23308 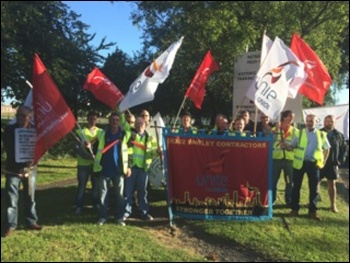 Striking Unite members working for contractors NICO at the massive Fawley refinery in Hampshire have won an important victory for trade unionists against the bosses' race to the bottom.

This strike was against contractors paying migrant workers from Bulgaria and Italy £48 for a 10-hour shift instead of the £125 union-agreed rate paid to British workers.

This attack by the employers on trade union terms and conditions has been at the heart of the austerity drive to boost profits at the expense of workers across Europe. The attempt to drive down wages fuelled anger against the Tory government and the European Union, reflected in the Leave vote in the EU referendum and the enthusiasm for Jeremy Corbyn and his stand against cuts and defence of trade union rights.

This attack on the unions at Fawley has developed over recent years, coming to a head with the first official strike on Thursday 14 July for over 30 years. Pickets received strong support, with refinery workers joining the picket on their way to work and others offering to come out on unofficial strike.

This action shows the enormous potential to cut across the bosses' attempts to cut wages and the racist attacks of right-wing politicians on migrant workers. Like similar strikes elsewhere it is workers' unity in struggle that gets results and on this stand further victories must be organised to end the race to the bottom and start the climb to the top. As striking pickets told the Socialist: 'There is no future for the next generation of young workers on £48 a day!'.

"All the workers at Nico will now be paid the same rate for the job. The 'pay parity' deal is backdated to September last year. Unite will also be recognised for collective bargaining purposes by the employer. This is a victory for fairness in the workplace and pay parity. A combination of the solidarity of our members, support from other workers on the Fawley site and the media attention on this dispute all contributed to breaking the logjam with management."