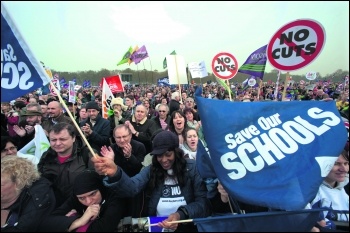 Education policy stands at something of a crossroads and the new academic year will be a significant one.

The start of the summer holidays brought news that Theresa May will look to lift the ban on the creation of grammar schools. This told us two important things: it confirmed the Tories' desire for a more selective and stratified education system, flying in the face of years of educational research. It also told us they don't have confidence in the academy and free school programme to deliver fully for them and big business.

The announcement came only a fortnight after Channel 4's Dispatches unveiled even more corruption and nepotism within academies. One choice cut was academy boss Ian Clelland's luxury Jaguar 'company car' on top of his handsome £180,000 pay check. We also saw the former head of Kings Science Academy in Bradford convicted of fraud while at the flagship free school.

Six years on from the Tories' mass expansion of academies, still no hard data can prove that academisation alone improves a child's education but there is a wealth of material on how some are enriching themselves at the expense of the public purse.

For all May's talk of social mobility, research by the Education Policy Institute showed Tory reforms had reinforced or even worsened social segregation. The disparaging remarks by former Ofsted chairman David Hoare about the Isle of Wight added to a sense that we're not really 'all in it together' when it comes to the education system.

Testing in all key stages has created an explosive mix for teachers and students. We are seeing primary school pupils stressed and demoralised as they prepare for Sats and other internal tests when they should be excited about learning and discovery. Primary pedagogy has always valued play and enquiry but standardised testing puts those approaches at risk.

The call for a boycott of Sats tests must be taken up energetically by the trade unions (especially the National Union of Teachers - NUT) and prepared for immediately. Important opportunities to capitalise on the anger around primary testing have been missed and we can't afford that again. Even the headteachers' union, the NAHT, warned it could support a boycott of Sats if discussions with ministers are not 'fruitful'.

The increased workload created by tests and how they're linked to performance-related pay can be used to frame the dispute and develop demands.

It would also tap into growing parental opposition indicated by thousands of parents withdrawing their students from school during test season. This is no substitute for action by those who work in schools but can be an important adjunct.

In secondary schools the constant drilling and endless 'interventions' have similar effects on students. The narrowing of the curriculum to focus on subjects with 'value' in the league tables is making school a more lifeless place for many. The government's Ebacc and now the new Progress 8 measures to evaluate school performance mean choices are not always made in the interests of the students but on what will look good in the league tables

The 2.1% drop in A*-C grades will have raised the question for many students who have busted a gut this year: 'was it really worth it?' Playing politics with kids' futures has consequences and we could see the development of action, including school strikes, by students in response to this.

This year will see further major changes to GCSEs with coursework and oral assessment being removed from most subjects and everything weighted on a final exam.

This drags us back to a situation where recall rather than genuine understanding is assessed. This naturally makes life more difficult for students who suffer from anxiety, those with special educational needs and with English as an additional language.

Despite the manifold attacks from the government, summed up by the education White Paper, teachers are willing to fight back. Just before the summer break we saw a day of national strike action from the NUT and motions passed by Unison and GMB (who represent school support staff) to explore action.

The NUT executive, meeting at the start of September, urgently needs to grapple with how to take forward the campaign of national strike action in defence of national pay and conditions and school funding.

The national teachers' strike in July saw many younger teachers out for the first time and energetic pickets and demonstrations. The summer term action was always seen by activists as a precursor to further strike days in the autumn.

This needs to be built for and demands linked to what's happening on the ground. Many teachers will be returning to increased class sizes, extra periods and a lack of resources.

This is a result of funding cuts and we need to link it to the need to step up our action. Work needs to be done on building in academies where the management approach and high turnover of staff has weakened union representation in some cases.

With more teachers qualifying 'on the job', rather than through a university based course, fewer are exposed to the unions early on. Some targeted work to reach those teachers is needed but our best recruitment tool is building confidence that action can win. 8,000 people joined the NUT in the run up to the last strike because they saw the need to resist the government's agenda.

We are not alone in this fight. The junior doctors are engaged in a very similar dispute and we could build on our links with their union, the BMA, and coordinate action. The NUT should be proactive in suggesting dates, perhaps to coincide with the Tory party conference and go to all education unions with a plan to take on the government.

Major campaigns by teaching assistants in Derby and Durham show the potential for further links to be made and with the National Union of Students and lecturers' union UCU preparing days of action in the coming months, we can place the defence of education firmly on the agenda.

All of this raises the need for legally binding limits on what teachers can be asked to do - a national contract for teachers is what we're fighting for. While campaigning for a national agreement, the content of that contract could also be used by teachers in individual schools or academy chains to secure a better deal at local level.

This is all brewing against the backdrop of the Labour leadership contest and the fight to transform the Labour Party into a party for working class people.

Teachers will be following the developments and will have been cheered by some of the policy announcements from Jeremy Corbyn, like the reintroduction of the Educational Maintenance Allowance and a National Education Service.

He acknowledges the need for a broader curriculum with an Arts Pupil Premium in primary and will consider drama and art's place within the national curriculum.

Corbyn has been critical of academies and in his historic speech at NUT conference this year made important links between child poverty and educational attainment.

He can go further. The 'renationalisation' of our schools and the end of academies should be explicitly in his programme. The demand for genuine democratic control of schools, with parent, teacher and student representatives involved in decision making would also prove popular within school communities where staff feel increasingly deskilled and micro-managed.

An injection of funds into schools to cut teacher workload could turn around the teacher recruitment crisis. Kicking out the privateers, putting a stop to the marketisation of education and developing bold socialist policies could make schools vibrant and exciting places and not exam factories.

That's what is at stake in this fight. Theresa and Justine, the holiday is over.