The Saturday evening rally centred on the turmoil in all Britain’s political parties. The ruling class are beginning to utilise their panoply of dirty tricks to demobilise the movement around Jeremy Corbyn. 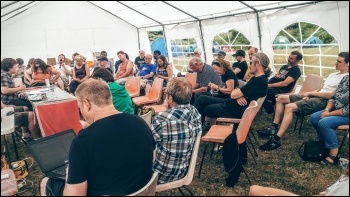 One of the discussions photo Becci Heagney   (Click to enlarge: opens in new window)