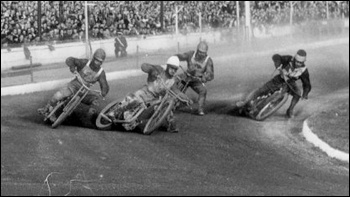 So, this is a show about the Spanish civil war?

Neil: It's a bit about that, and a lot about the politics of the 1930s in Britain. It follows the life of Clem 'Dare Devil' Beckett, his life story.

Tell us about Clem Beckett.

He was a top speed rider in the new sport of dirt track racing, or 'speedway' as it's called. He was the superstar of Sheffield stadium.

He was on it all the time, trying to give opportunities to young riders. Inevitably this put him at loggerheads with the business owners of speed racing. They realised how much money they could make. You could get 15 or 20,000 just at scratch events, at coal pits.

How does this connect with politics?

Before he was a rider, Clem worked for Platts, making machines for the cotton industry. Then he went to a blacksmith's, shoeing horses. He joined the blacksmiths' union. That's where he started to be politicised. He was only about 15 or 16.

There's this story about him going to see [legendary socialist union organiser] Tom Mann speak. There and then he joined the Young Communist League.

He got into a fight with the speedway authorities. He wrote articles for [the Communist Party's newspaper] the Daily Worker, explaining how track owners were killing the sport. Tracks were closing down all over the place.

Business owners were doing it to maximise profits for themselves, but also for the star riders. There were not the opportunities for young riders anymore. So he wrote about the men bleeding the sport of speedway, and the owners banned him from riding.

How does Clem cope with the ban?

He travelled Europe in a 'wall of death' show. He ended up going to Hamburg in 1931. Right into the fire!

I've made a bit up here. There's not much about him while he was there, but he broke his leg in Germany. There's the story of Oswald Lasselly at the same time. Lasselly was shot in the stomach by a Nazi police officer, his subordinate, just for having Jewish descent. It was quite a big news story in Hamburg at the time.

I've combined the two. Clem gave blood at some point to somebody in hospital. Oswald Lasselly would have needed blood. We get the story of the rise of Nazism.

Does he come back?

Yes. Then he goes with the British Workers' Sports Federation to tour the Soviet Union. And he takes part in the mass trespass of Kinder Scout [to protest against walkers being denied access to the English countryside].

Eventually he sets up a bike shop in Manchester on the Oldham Road. It's around about the time that [British fascist leader] Oswald Mosely comes and does his big meeting at Belle Vue.

I've no record Clem was there, but he had to be. He was so active, always taking his bike round and delivering the Daily Worker. He must have been among the 3,000 who greeted Mosley and his Blackshirts and shouted him down. "Mosley go to hell" and probably much ruder things. Singing the Red Flag and the Internationale. 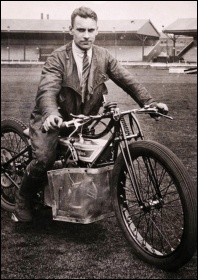 So how does Clem end up in Spain?

He meets Harry Pollitt, general secretary of the Communist Party at the time. As soon as [the civil war in defence of the revolution in] Spain kicked off, Pollitt asked Clem to take charge of a fleet of Communist Party-funded ambulances to Spain.

Eventually he got to Jarama, having got through training - such as it was. They were really unprepared for it all. He dies with about half the British Battalion in the first day. All these fantastic bright minds and brave fighters go off to Spain and perish.

The man was a motor. I don't think he felt pain. The number of broken legs, arms and whatever. He just carried on. His story is a great story.

It's an epic story to tell with just two actors.

Louise: With a two-hander production, you have to be more creative. You have to solve problems.

Then you have speedway, which is huge. You have the 'wall of death'. Jarama where he's killed, a battlefield. Logistically it's quite difficult.

Neil: To achieve it I've gone back to the time, to poetry and songs. Songs the volunteers sang, songs of the time about motorbike races, George Formby songs, Ewan MacColl's political songs.

So it's all-singing, all-dancing?

Neil: Not a lot of dancing.

Louise: No, there is dancing!

Neil: That's news to me.

Louise: It's not for you!

Why tell this story now?

Neil: It's about a point in history that galvanises extreme political views. There's a sense of internationalism and unity at this time, versus a feeling of reactionary nationalism. Inevitably a furnace of political activity across the board.

Clem's story goes to the heart of so many modern political issues. The times are really so similar.

At the end, it's one of those stories that makes you want to stand up and leave the theatre and join the fight.