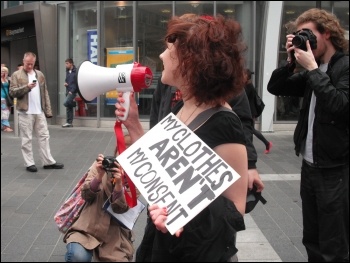 Three in five young women aged 13 to 21 have faced some kind of sexual harassment at school or college in the last year.

But tokenism at the top has gone together with retaining practices like sexist school and workplace dress codes.

The report also finds 29% of young women aged 16 to 18 have experienced unwanted sexual touching at school. And 71% of all students that age regularly hear terms like 'slut' and 'slag' used towards young women.

Another study has listed the best and worst places to be a girl in the UK. Kids' charity Plan UK finds that poor inner-city areas give young women the worst experiences and life chances.

The bottom five are Middlesbrough, Blackpool, Manchester, Nottingham and Liverpool. The best is Waverley in leafy Surrey. Fighting sexism is a class issue.