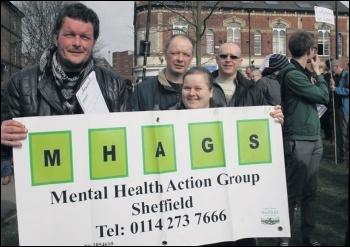 "Why is it when we have a good day, only bad news follows? The good news is we had a great pool competition against St Wilfrid's Centre Sheffield and we won 3:2. The bad news shortly after was that we will no longer receive any funding from the council next year."

This was the reaction of Mental Health Action Group Sheffield (MHAGS) to learning that our £10,500 a year funding from Sheffield's Labour council will end on 31 March 2017. The day centre is used by 20 to 30 people every weekday, providing meals, activities and trips.

It is the only mental health user-led service in Sheffield and operates without any paid staff. If it closes, there is no similar alternative provision in the city and it will have disastrous consequences.

The 'Friends of MHAGS' campaign has been set up by service users and supporters to force the council to restore funding and keep this vital service.

I founded this vital user-led service back in 1992. We were a campaign group in the 1980s and we were responsible for winning mobility passes for the disabled. It was piloted in Sheffield and later became nationwide.

The reason why we became a day centre and later a charity in 1990 was that the last legislation Margaret Thatcher passed before she was ousted over the poll tax was the NHS in England becoming trusts. This meant psychiatric day centres closed down at an alarming rate.

The organisation was born out of a massive campaign to save Pitsmoor day centre. We had a small victory as we thought we came to a compromise - it would reduce its opening times to keep it open.

Later they used the reduced staffing levels to justify reducing our grant support! We have been constantly under attack.

Our first premises in the town centre accepted 40 to 60 service users a day. Then Sheffield City Council announced it was selling off the premises for private housing developments. Subsequently they moved us to Shalesmoor which was a red-light area, which put off service users.

In 1997, when the council was in the process of redeveloping the Peace Gardens where our premises were, we staged an occupation highlighting the social cleansing policy that Sheffield City Council was implementing.

Eventually we were forced out and now our day centre is once again out of the city centre, reducing its accessibility to many service users. Even so, we will fight to win back our funding and keep MHAGS open.