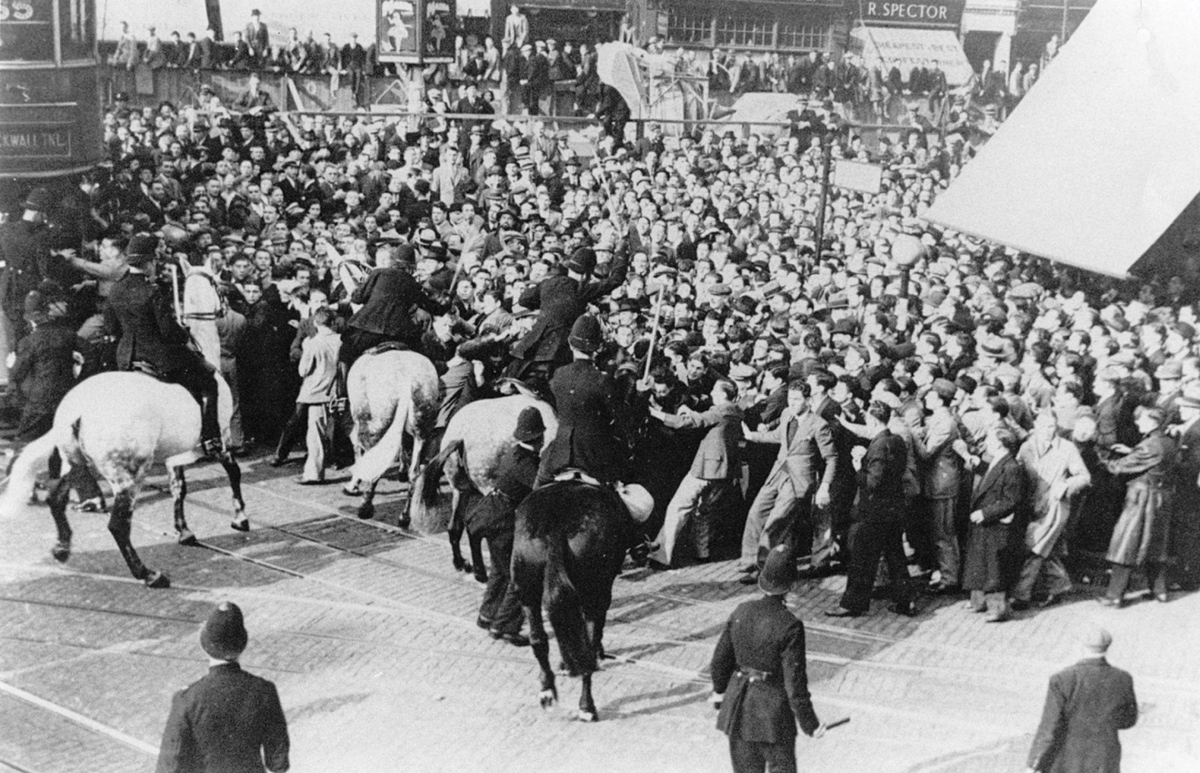 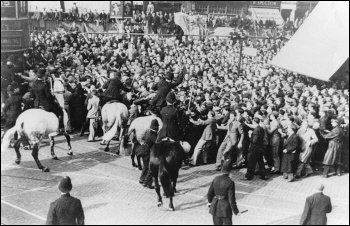 This month marks the 80th anniversary of what has gone down in history as the Battle of Cable Street. On 4 October 1936 thousands of workers across the East End of London rose up to prevent a march through their areas by the uniformed thugs of Oswald Mosley’s fascists.

The fascist threat in 1936 was much greater than the far right groups around today. Hitler was in power in Germany, Italy had been under Mussolini’s fascist jackboot for 14 years and the opening struggles had just begun in Spain where, despite the heroism of the Spanish working class, three years of bloody conflict ended in the victory of Franco (see http://bit.ly/2d6d86v ).

In Britain, one of the earliest fascist organisations, the British Brothers League, claimed around 45,000 members at the turn of the century. Mosley’s British Union of Fascists (BUF) – the Blackshirts – which boasted a full time defence force, claimed 40,000 members and had the enthusiastic support of Lord Rothermere’s Daily Mail.

The Blackshirts held a notorious rally at Olympia in 1934. 12,000 people attended, with 2,000 uniformed Blackshirts there to beat up any opposition that dared rear its head. From that point on, anti-Semitism became a central point of Mosley’s propaganda.

This was the heart of Stepney, where over 60,000 Jews lived in cramped terraced housing, typical ‘two up, two down’. Our house would later have the luxurious addition of a basement, built to afford shelter during the war.

The lead-up to the events of 4 October was a series of meetings throughout east London, as the fascists attempted to whip up working class opposition to Jews as the scapegoats for the economic crisis, saying “Jewish interests” were responsible for the looming war.

There was an immediate response to this; the Jewish People’s Council launched a petition calling for the march to be banned which gained 100,000 signatures within two days. There was massive opposition to the march. Yet, the anger and readiness to act of the youth and the rank and file of the movement was not matched by the leadership.

The Communist Party (CP) was at its strongest in the East End – CP member Phil Piratin was elected MP for Mile End in 1945. In the street where I lived as a child, virtually everyone was in the party. However, the Young Communist League had organised a rally in Trafalgar Square on the same day as the march, in solidarity with the Spanish Republic. East London CP organiser Frank Lefitte put out a statement: “If Mosley decides to march, let him. Don’t attempt disorder.”

As for the Labour Party, George Lansbury (the hero of Poplar council, jailed in 1921 for resisting cuts in poor relief – see http://bit.ly/2dlAyEa ) wrote: “What I want is to maintain peace and order, and I advise people who are opposed to fascism to keep away from the demonstration.”

The Jewish hierarchy organised a sports day out, trying to get the youth away from the East End: “Jews who, however innocently, become involved in any possible disorders will be actively helping anti-Semitism and Jew baiting… keep away.”

The largest Jewish settlement in the East End then was in Fairclough (now Henriques) Street. Along with the synagogue, ante-natal clinics and youth clubs that it housed, it was an organising and recruiting point for the Communist Party among the Jewish youth – it was there that my mother met my father and recruited him to the party. They wanted to meet the fascists face to face in organised opposition. 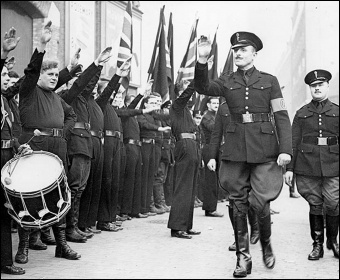 On the day, the East End erupted. Over 300,000 packed east London’s streets – 50,000 congregated around Gardners Corner, the site of a department store between Aldgate and Whitechapel. It was there that a police horse was pushed through the plate glass window of the store and there that my aunt was kicked in the head by another police horse.

At Cable Street, too, barricades were put up to stop the fascists marching and the police defending them. A shower of rubbish and the contents of chamber pots – few houses had indoor sanitation and these were a common feature of workers’ homes – were thrown on the police, while children threw marbles under the horses’ hooves to send them crashing to the ground.

A united campaign of Communists and Jews on Commercial Road and Cable Street, the Irish Catholic dockers who threw up the barricades, the youth and the women – my mother, 17 at the time, sneaked out of the house to join the battle – had dealt Mosley a major defeat, destroying any hope he may have had of building a mass fascist party in Britain.

The lessons of the Battle of Cable Street are many: the role of the labour and CP leaders, the fact that unity can be built in action. But it also has lessons for the building of a mass workers’ party. The CP was widely seen as the leadership of the battle: party membership doubled between 1935 and 1937 and again in 1945.

CP influence on the local council continued for some time. Yet, the chasm between the CP leadership, tied to the politics of Stalin, the Comintern and “popular frontism”, and the rank and file caused an irreparable breach in the party.

The streets were joined by covered arches, where, in the days before legalisation, the bookies would wait to get the pennies of local housewives putting an each way bet on Lester Piggott. One of my uncles, a CP member, worked there as a bookies’ runner, keeping an eye out for the police.

My father, a building site worker, left the party in 1956 in disgust at the Soviet invasion of Hungary; he later donated towards the publication of Joe Jacobs’ book Out of the Ghetto.

My mother’s sister and her husband, Sam, who had been involved in the Workers’ Film movement, both lifelong party members, left in despair in the 1970s, eventually joining the Labour Party.

Shortly before their deaths, they found in supporters of Militant, the Socialist Party’s predecessor, the same commitment and beliefs they had had in their youth. 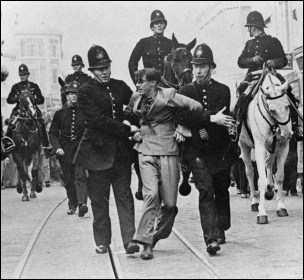 Police drag off an anti-fascist protester   (Click to enlarge: opens in new window)