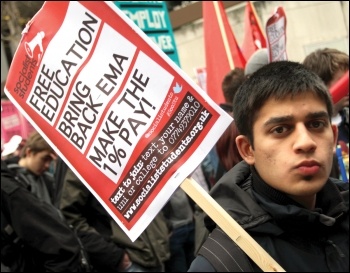 Bring back EMA! Photo by Senan   (Click to enlarge)

In an area with such poverty and neglect as Knowsley, Merseyside, its shocking that no A-levels course will be on offer anymore.

The last academy, the Halewood Academy, to close down this provision claims: "it has become financially unviable to continue to deliver A-Levels."

They are following suit from two other A-level providers in Knowsley - Knowsley Community College and All Saints Catholic High School sixth form. The latter is the senior school which I attended and provided A-level courses to a good standard. A-levels are one of a couple of routes into higher education which students are constantly told will give them the best chance to get a good job.

Only two other local authorities currently have no state funded schools with A-Level provision - the City of London and the Scilly Isles - where the number of schools and population is far smaller than that of Knowsley.

Maria Eagle is MP for the area around Halewood Academy. Her excuse was that as it was a privately run business, there was nothing she could do about it.

Students will now need to travel up to 12 miles to other premises serving A-level provision. Transport links are poor and would be a financial burden for most, if not all, considering that Education Maintenance Allowance (EMA) was taken away from students.

I received this EMA and the burden was lifted from my parents, while living in one of the poorest and most deprived areas in the UK.

This is an example of how the poorest suffer the hardest under austerity.