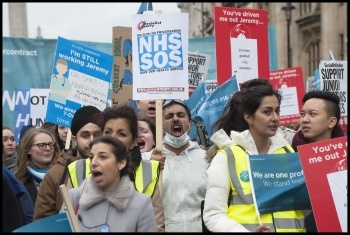 Left isolated by the Trade Union Congress (TUC) after almost a year of struggle, battered by a wave of vicious media bile, added to by threats from the General Medical Council and sections of the medical establishment, the BMA Junior Doctors Committee has called off the proposed five-day strikes by junior doctors set for October, November and December.

This follows the scrapping of a planned walkout in September. Many junior doctors are angry at the decision by their union the BMA to call them off. An emergency BMA conference of junior doctors should be organised to discuss and democratically decide on next steps for their dispute.

Junior doctors have waged a heroic struggle against Jeremy Hunt's imposition of a dangerous and divisive contract. His intention was to take on and beat junior doctors first, before carrying out similar attacks on all health workers.

The Tories so-called seven-day NHS is part of their plans to close some hospitals while running others even more intensively, preparing for eventual complete privatisation.

Junior doctors on picket lines, on the media and on demonstrations have showed they understand that the future of the NHS is at stake. The leaders of other health trade unions and the TUC should have launched a campaign in solidarity with the junior doctors.

The joint BMA and London National Union of Teachers (NUT) demonstration in April, which the National Shop Stewards Network (NSSN) helped initiate, showed the potential to build such action.

It was disgraceful the TUC did not invite a BMA junior doctor to speak at its conference. The TUC leadership fear trade union members would be inspired by the junior doctors to take similar action.

The battle in the NHS won't go away, not only will the junior doctors be faced with the reality of trying to work under the new contracts but the continued impact of massive NHS cuts will continue to bite and force other workers to fight.

Already the BMA GPs section voted that if matters are not resolved with the government over workloads and cuts then they be balloted for industrial action. And Unison, another health union, was forced under pressure to move an emergency motion in support of junior doctors at TUC congress in September.

A national demonstration in support of the junior doctors should be called as a start to organising the action needed to defeat the Tories NHS attacks.