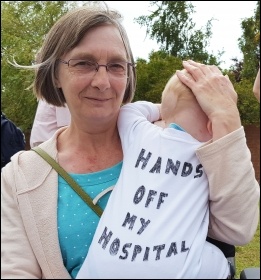 'Once you lose them - you will never get them back', this was the stark warning in a letter published in a local Devon paper. The letter refers to the current consultation period taking place on the closures of community hospitals with the loss of hundreds of beds. The 'alternative' is community care in people's homes.

This is being met by widespread resistance despite the fact that the 'consultation' is regarded as a sham - a done deal - a word to be laughed at!

All elements of a democratic say as to whether people want their local hospitals closed or not, seem to have been removed. But these proposals have been met with resistance all over Devon.

In Paignton, a town with a population of 50,000, the Clinical Commissioning Group (CCG) has been forced to hold five extra meetings. People have been locked out of overflowing meetings. Ashburton and Buckfastleigh residents have forced the CCG to hold another meeting in a bigger venue.

The closures and cut backs are being applied all over Devon. North Devon District Hospital is seeing a run-down of its maternity services which will mean a drive to Exeter for pregnant mums.

The newly formed Socialist Party branch in South Devon has been on the streets getting hundreds of signatures and leafleting. People have seen so-called community care in action - ten minute visits if you are lucky.

As was pointed out in last week's Socialist, children's services in Devon are already in the hands of Virgin Care. The attacks and privatisation of the NHS are becoming a daily reality. Socialists in South Devon are part of the resistance to that threat.