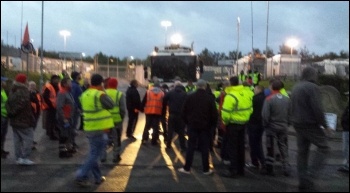 By a striking Sheffield bin worker

It was a proud day to be a bin man in Sheffield on 17 October as a hundred or more of my GMB union colleagues and I protested about the greedy corporate giant Veolia's refusal to agree our request for a 2% pay rise. They say they can't meet our demand while paying thousands to ship in scab labour and accommodate them in hotels.

Personally, I like to think we're playing our part in ridding our city of one of Sheffield City Council's most expensive mistakes.

Veolia uses rate payers' money to satisfy its own ambitions all around the world and it shows a greater obligation to its shareholders than it does to those whose council tax funds them.

Veolia aren't here by any mandate from the people of Sheffield, but because the council privatised waste management on a 30 year contract.

During our strike, we formed a peaceful blockade to obstruct vehicles and scab labour from leaving the yard.

Veolia spirits millions away from our city when our council services have been stripped to the point of being ineffective - a concern we should all stand against.