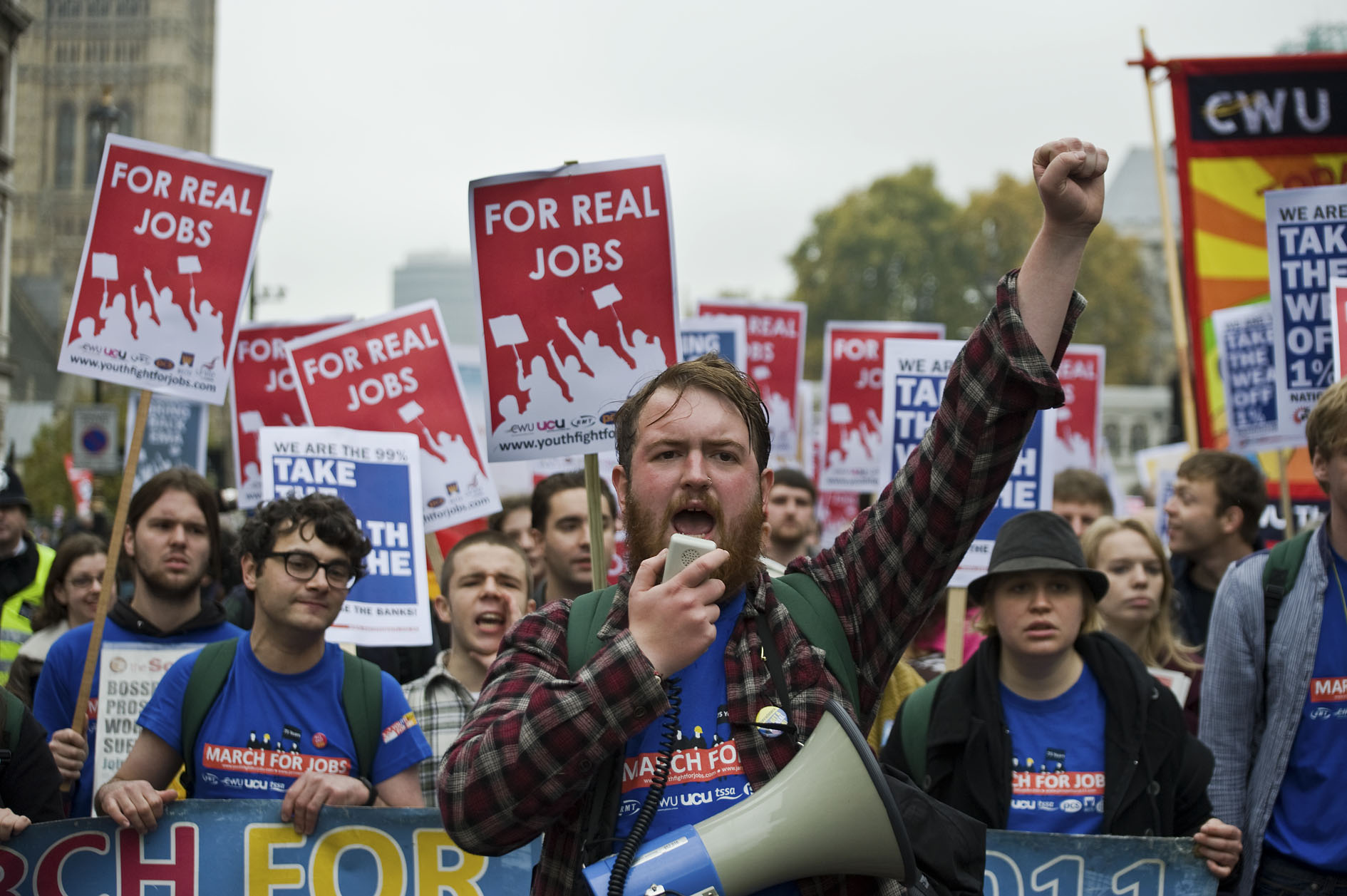 Five years on from the March for Jobs

Eighty years ago, 200 unemployed workers from Jarrow in the north east of England – a town that relied on the shipbuilding industry, hit hard by the Great Depression – set off from home, marching 300 miles to London to deliver a petition.

In 2011, to mark its 75th anniversary, Youth Fight for Jobs followed in the footsteps of this Jarrow Crusade. We weren’t just commemorating long-past pioneering struggles. We were marching for jobs, homes, grants, youth services and free education at a time when youth unemployment reached one million in Britain, and surpassed more the 50% in Greece and Spain.

The conditions of people who are forced out of work today are awful. Benefits do not cover the cost of living or housing. The Tory government secretly sets targets to kick people off benefits.

In 1936 it was worse. The inter-war poverty of the 1920s and 1930s threw millions of workers out of their jobs. The welfare state was still just an idea. The only assistance available – the poor relief – was measly and humiliating.

The first ‘hunger march’ took place in 1922. There were many more throughout the 1920s and 1930s. Some were organised by trade unions, but most by the Communist Party and an organisation it set up called the National Unemployed Workers Movement.

1936’s march is the most famous and celebrated of the hunger marches. This is partly because it has been sanitised by politicians. The radical history of the unemployed movement has been airbrushed out.

Tory MP for Scarborough Robert Goodwill said the Jarrow Crusade had “genuine cross-party support from all sections of the political divide.” Despite his apparent sympathy, he made it clear he had no truck with the demands of Jarrow marchers – then or in 2011.

In reality the original Jarrow marchers did face opposition. For example, in one area police encouraged game keepers to stop the march – the game keepers refused. Undoubtedly, if Goodwill had been making trouble in 1936, he would have been egging on the police.

One Jarrow march supporter said: “Robert Goodwill isn’t fit to clean the boots of today’s Jarrow Marchers.” Sadly we never received a reply to our invitation for Goodwill to join the march for a week.

The 2011 Jarrow March consisted of a group of unemployed young people marching from Jarrow to London – between ten and 15 miles a day. We stopped for protests and meetings at many towns along the way, and were joined by trade unionists, students and activists for different stretches – some for an afternoon, some for a week. The march’s demands were:

From the outset Youth Fight for Jobs was clear that we wanted to unite workers, young and old, to fight for decent jobs for all. We didn’t blame people in work for youth unemployment. We put the blame at the feet of austerity and the capitalist profit system.

We were clear that workers organised in trade unions are key to changing society. Our Jarrow March took place during the public sector pensions struggle of 2011, which, shortly after our march, culminated in a huge public sector strike in November. That movement demonstrated clearly the potential power of the working class.

That’s why we appealed for support from trade unions – eight national trade unions supported Youth Fight for Jobs already and we got a great response for the march. Trade union general secretaries like the RMT’s Bob Crow, PCS’s Mark Serwotka, FBU’s Matt Wrack, and UCU’s Sally Hunt wrote in the press in support of us.

The FBU donated woolly hats and waterproof coats which kept us warm and dry. They also donated use of their campaign fire engine for us to hold our final rally in Trafalgar Square. And I still have my Bob Crow Jarrow March t-shirt. In every town we stopped in trade unionists provided accommodation, social events, rallies, food and meetings.

We used our five-week march to build support across the length of the country for the 30 November strike. We pointed out that this issue was relevant to young people. We were faced with the crazy situation where millions of public sector workers were forced to work longer, denied their right to retirement, while millions of young people couldn’t find a decent job.

The pensions struggle wasn’t the only big political movement that fed into the anger we wanted to express through our march. Students had been the first to move into action against the Tory-Lib Dem coalition government in 2010.

Tuition fees where tripled to £9,000 a year and EMA college grants were scrapped. 50,000 joined a National Union of Students protest, dwarfing the organisers’ expectations. This sparked a wave of protests and occupations.

Frustration poured out in inchoate anger in August 2011. English cities, starting in Tottenham, north London, erupted in riots sparked by the police killing of Mark Duggan. Youth Fight for Jobs immediately set to work in Tottenham, organising a protest against cuts to youth services with Turkish and Kurdish youth organisation Day-Mer.

Internationally, anti-capitalist protest movements like Occupy and the Indignados were springing up as we were marching. During the Jarrow March, Paul Callanan – marcher and national organiser for Youth Fight for Jobs – spoke at Britain’s biggest Occupy camp in central London. When he called for free education for all, he was met with rapturous applause.

Long marches weren’t new to Youth Fight for Jobs. Our inaugural demo in 2009 was through the poorest boroughs of London to where the G20 world leaders were meeting.

Then in 2010, we marched through Barking where the leader of the far-right racist British National Party, Nick Griffin, was standing to be the MP. We said yes to jobs, homes and services for all, and no to racism.

Drama began before we even set off from Jarrow. South Tyneside Labour council wanted us to pay thousands of pounds for our right to march. We flatly refused, and, backed up by local trade unionists, forced the police into a total climbdown. 500 marched us out of Jarrow, headed by a brass band.

At the end of the first day in Birtley, we visited AEI cables workers. They were on strike after being sacked at two minutes notice.

We tried to donate to their strike fund, but they turned down our donation, saying they were proud to support us and that we needed it more than they did.

Thousands greeted us when we arrived in London – including a 106-year-old who had met the original marchers when they arrived in 1936 too. Police did their best to stop Occupy activists marching to join us.

Hundreds of public and private sector workers united to greet Jarrow Marchers in Hull. We received one of our warmest welcomes at our biggest demonstration outside London, which was organised jointly with workers of BAE Systems who were facing 3,000 redundancies.

Robert Goodwill initiated disgusting press attacks from the Sun, the Telegraph, and the Independent that showed our march was rattling the establishment. The journalists who did actually march with us admired our resolve.

The Jarrow March was great for increasing Youth Fight for Jobs’ profile. Despite media bias, journalists still often come to the campaign to get a comment from ordinary young workers. Their massive resources can’t give them a channel to working class people on the sharp end of the cuts like we can.

Ordinary people though, were lifted by our efforts. As we said in the Socialist at the time: “As we walked down the pavements and verges of Britain’s A and B roads, car horns were beeped and people stopped to wish us well. One woman stopped her car and pressed £100 cash into a marcher’s hand, saying she completely supported what we were doing.”

I am incredibly proud to have been a Jarrow marcher. Seeing the Tories elected following an economic crisis that exposed their system was difficult. Austerity and unemployment put a question mark over everything in your life. But first hand, nothing has cemented my confidence more in working class people’s ability to change the world.

Marching day after day as people came up to you to shake your hand, beep their horn in support, or throw money in your bucket was inspiring. And arriving night after night into town after town of likeminded supporters was a pretty good way to spend October to November 2011.

The issues facing young people then still remain five years on, and they will undoubtedly continue to play a key role in the movement against austerity.

Get involved with Youth Fight for Jobs today

Youth Fight for Jobs continues to campaign across the country. For example, we are involved, with the BFAWU bakers’ union and others, in the Fast Food Rights campaign – demanding a £10 an hour minimum wage, an end to zero-hour contracts and the right of all workers to organise in trade unions.