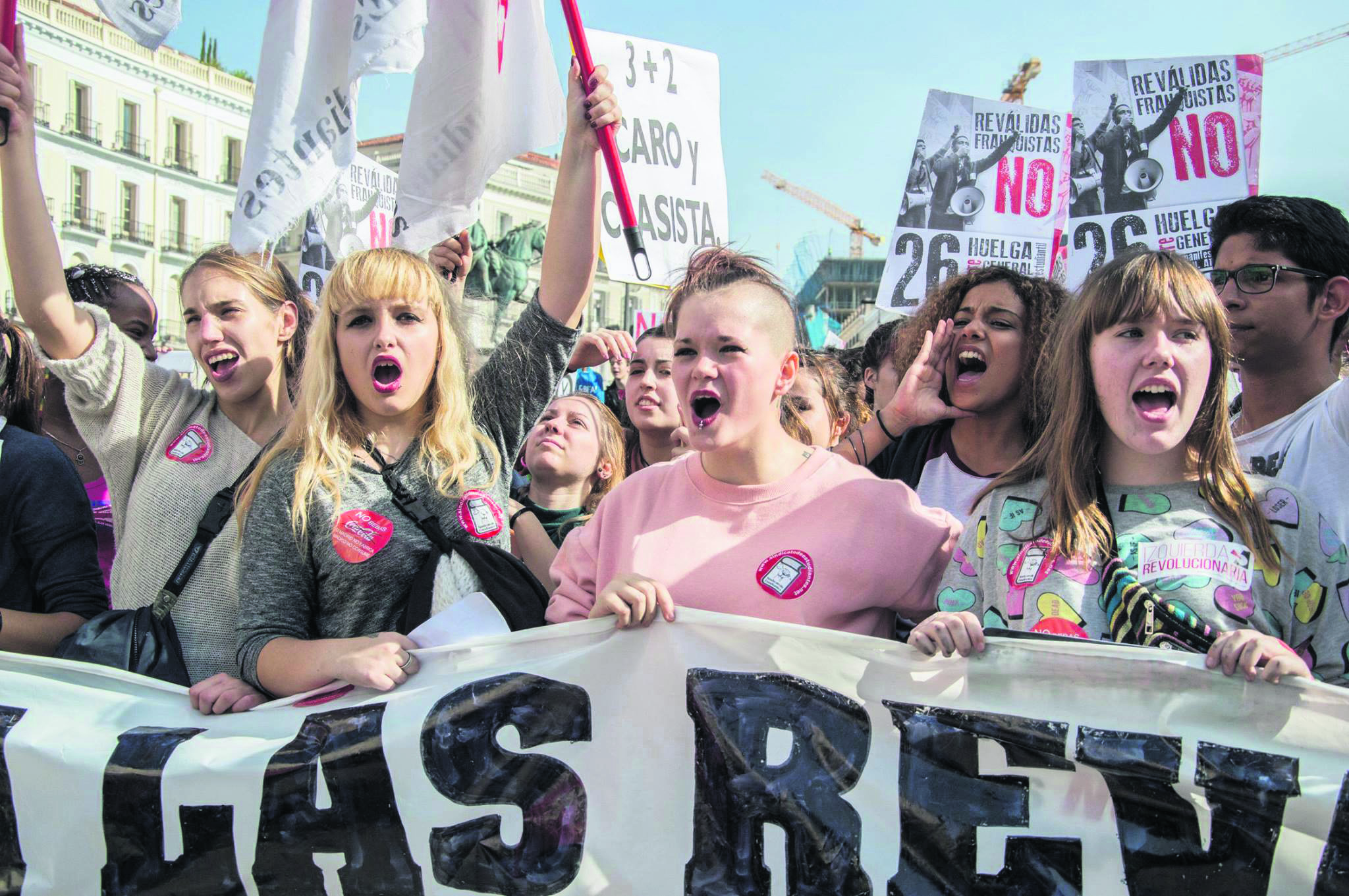 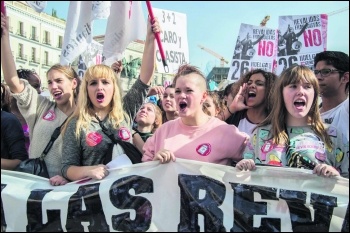 A tidal wave of protest swept through the streets and squares of Spain on 26 October. Two million, mainly school students, took part in a strike organised by Sindicato de Estudiantes (SE – students union). Claire Laker-Mansfield, national organiser of Socialist Students (England and Wales), was invited to participate by Izquierda Revolucionaria which plays a leading role in SE. Here is her report.

The strike was solid – with over 90% participation. But students did not simply stay at home. More than 200,000 young people joined the demonstrations that had been organised in over 60 towns and cities. This was a mighty day of resistance.

In Madrid alone, 60,000 students swept through the streets. The mood on the protest was an infectious mix of anger, determination and empowerment. For thousands of those taking part, this was their first major demonstration – a first experience of taking collective action.

The strike’s most prominent demand was to abolish the ‘revalidas’ that are being introduced by the government. These first existed under the dictator General Franco and are a series of compulsory exams that students are forced to take at different stages of their schooling.

Under the plans, students who fail to pass the tests will be prevented from progressing to the next stage in their academic study. What’s more, qualifications they have already obtained will not be valid.

If rolled out in the way the government intends, these exams will prevent thousands of students, especially those from working class backgrounds, from accessing university. Worse still, thousands more could be forced to leave education early, with almost no formal qualifications. In reality, the intention is to brand young people as ‘failures’ and to lower their sights and expectations.

As well as demanding an end to the Francoist ‘revalidas’, the strike was also against the ‘LOMCE’ – a government decree which includes swingeing cuts to education.

One of the chants which rang out most often was ‘Si Se Puede’ – yes we can. This was the slogan used by the anti-eviction housing movement that has swept Spain. It showed the way the school students taking part in the strike saw themselves as participants in an overall movement against austerity and its effects.

One of the warmest receptions for speakers addressing the crowd was for a striking Coca-Cola worker. “Workers and students unite” was repeatedly chanted as the march went on.

One word that protesters repeatedly chanted was ‘traitors’. They were referring to the rotten capitulation of the so-called Spanish Socialist Workers Party (PSOE) leaders. A majority of PSOE MPs abstained in a parliamentary vote to elect the prime minister.

More mass protests have taken place opposing the formation of an unelected PP government. The SE has declared that, unless the government meets its demands, in particular by scrapping the ‘revalidas’, a further student strike will take place in November. Given the anger that is boiling over, there is every possibility that this could be as big, or even bigger, than the first one. 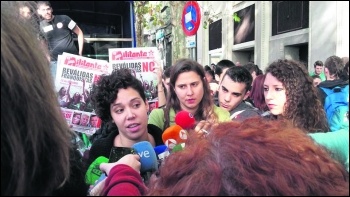 This stood in contrast to the leaders of the major trade unions. But Ana was also able to raise the need for a generalised fightback – helping to apply pressure to the tops of the trade unions to do their jobs.

On the demonstration, I was able to mention only a small number of the solidarity actions that had been organised by the Committee for a Workers’ International (CWI). But every example I gave generated huge cheers.

The action organised by the CWI in Hong Kong – in which Spain’s consul general physically assaulted and attacked a protester – served to demonstrate the establishment’s fear of movements like these, as well as the dangerous conditions which socialists work in in many parts of the world.

In Andalucia it was spectacular: 15,000 in Granada, 10,000 in Sevilla, 7,000 in Malaga, 2,000 in Cadiz and over 1,000 in Almeria and Huelva… Thousands also marched in Extremadura, the Canary Islands, and the Balearic Islands, in Murcia, Castilla y León, Castilla La Mancha, and Cantabria.