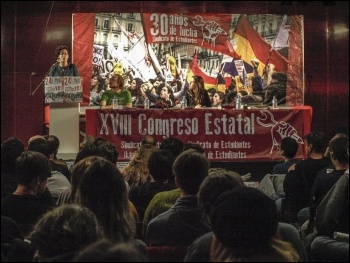 On 19-20 November, 300 young revolutionaries from 26 cities throughout the Spanish state - along with dozens of trade unionists and working class militants - met in Madrid for the 18th congress of the Spanish Student Union.

CWI members and representatives - including Peter Taaffe, Socialist Party general secretary - had the privilege to attend. The congress displayed a vibrant organisation whose forward march already has Spain's new, illegitimate PP government on the ropes.

Founded in 1985, and forged in the heat of another historic student movement which defeated the Felipe Gonzalez government, the Sindicato de Estudiantes (SE) is today at the epicentre of the class struggle.

It called and organised the momentous general student strike of 26 October (26O) which brought millions of students out on strike and over 200,000 onto the streets.

26O shattered the suffocating 'social peace' of recent years. In her opening speech, Ana Garcia, SE general secretary, explained that its struggle against the education attacks and the anti-working class Francoist 'revalidation' exams has become the new government's most troublesome 'hot potato'.

On 24 November, the SE will again empty the classrooms and fill the streets in another general student strike. For the government to begin its mandate with a defeat to the SE would have an enormous impact.

The message that struggle with militant methods pays will not be lost on the rank and file of the labour movement, whose leaders' main policy of social peace and class collaboration has won no such results.

SE's unbreakable link with the working class was underlined throughout the congress.

Speaker after speaker emphasised that this was a union of working class students, wedded to the struggle of the wider working class against austerity and capitalism.

The atmosphere throughout the weekend was electrifying.

Those attending, many who had only recently joined the union, were full of confidence and combativity. The anger against the ruling class, the sorrow of mass emigration and determination to fight for a future, were all vividly on show.