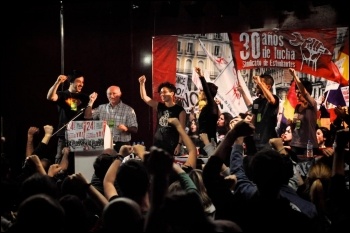 A joint rally was held recently to celebrate the 30th anniversary of the Spanish Students' Union (Syndicato de Estudiantes - SE), and the 40th anniversary of Izquierda Revolucionaria/El Militante (IR), the revolutionary Marxist organisation which formed the union and continues to lead it.

Over a dozen speakers addressed the rally. Antonio Garcia Sinde, a leading IR trade union organiser, spoke of the birth of Nuevo Claridad (IR's predecessor in the 1970s), as a Trotskyist organisation working in clandestine conditions under the Franco dictatorship.

A small group of young revolutionaries, they entered into contact with Militant supporters in Britain and developed the tools and methods necessary to build a powerful force.

Speakers from throughout the history of the SE and El Militante spoke: from its foundation, to the anti-war movement and the movement in response to the terrorist attacks in Madrid in 2004.

El Militante/Izquierda Revolucionaria was founded as a section of the CWI, though a split in our forces at the beginning of the 1990s led them to chart a separate path for over 20 years.

The common root of both organisations was on show throughout the weekend, with multiple references to Militant, the Liverpool council battle of the 1980s, etc.

The participation of CWI comrades, and of Peter Taaffe representing the CWI's International Secretariat, was a key part of the process of discussion and collaboration through which our paths are again converging.

Sean Burns, of the Socialist Party in Northern Ireland, also spoke on behalf of the young CWI comrades present, who attended from Portugal, Ireland, England and Wales, Belgium, and Germany.

Peter was met with a standing ovation before he had even begun speaking! He explained how both our past and present successes, along with those of SE today, show the necessity of revolutionary leadership, methods and policies, even in the struggle for reforms. The building of unity between the CWI and IR is an important step in building this revolutionary leadership, which will be key to the next period internationally.

The hall rose to its feet as Peter explained that while the 20th century had been one of revolutionary struggle, the 21st will be one of revolutionary victory. Paraphrasing the heroic sans-culottes of the French revolution, whose slogan was "tremble tyrants the masses are coming", he addressed himself to arch-reactionary Donald Trump: "Trump, the working class is coming".

His graphic account of how a small but audacious revolutionary group had built a mass rebellion of the youth against the Gonzalez government, leading three months of student strikes and occupations, was electrifying.

The victories which were won by that movement - including free second-level education and the building of schools - are among the rights being defended by the SE in struggle today.

Both the SE and IR have enormous potential to grow and develop in the next months and years. Many of the students who were present took the decision to join IR during the weekend, recognising that to fight and to be organised is key, but not enough. A revolutionary political leadership must also be built.

All the CWI members who attended the congress left with a deep conviction that IR is on the right path towards the building of such a political instrument.