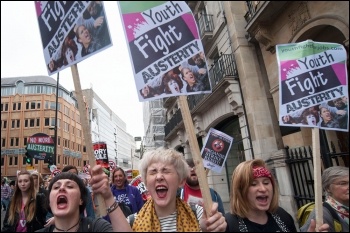 By 2020 women will have shouldered 85% of the burden of changes to the tax and benefits system, claims a new report by campaign group 'A Fair Deal for Women'. It highlights the disproportionate effect of austerity.

Theresa May thinks otherwise. She leads a government whose sexist policies continue to negatively impact on women's working and family lives, and increase the gender gap.

This impact can have tragic consequences. Two thirds of women's refuges are potentially facing closure due to the housing benefit cap.

Junior doctors have also been enraged by the overt sexism in the new contract the Tories are trying to force upon them. The government states that "any adverse effect on women is a proportionate means of achieving a legitimate end."

Discrimination against women in the workplace is rampant, with sexist dress codes commonplace, and a pay gap that will take an estimated 62 years to close!

It's bad enough to arrive at work knowing you will be earning around a fifth less than your male counterparts. Insult is added to injury if you're sent home to change into high-heeled shoes!

The effect of benefit and tax cuts on women illustrates that fighting sexism is a class issue, and cannot be separated from the fight against the Tories' unrelenting agenda of austerity.

The way to improve women's lives is through the reversal of austerity, creation of secure jobs on decent pay, affordable housing - and free education, adult care and children's care. We need a mass workers' party to help draw women into the fight against inequality in all its forms.