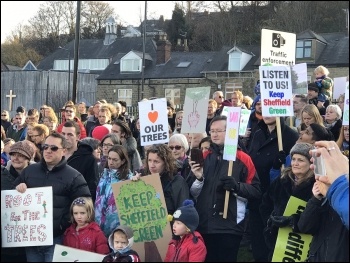 Residents of Rustlings Road in Sheffield were awoken by the chainsaws of Amey contractors at 5am on 17 November, protected by police. They were cutting down eight trees as part of a £2.2 billion PFI contract. Residents were told to move their cars or have them towed away.

Three protestors were arrested - under the Trade Union and Labour Relations Act!

Only five days later, the council announced a plan to allow a Chinese developer to turn the much-loved 90-year-old central library into a 5-star hotel, ruining the public space of Tudor Square.

These closely followed the closure of 'consultation' on new flood defence plans, involving damming river valleys much used by local walkers, and flooding major parks in the city in order to release land elsewhere for development.

All these events stem from the Labour Council's failure to stand up to Tory Government cuts and their desperation to get money from the private sector.

The council proposes a £40 million cut next year and a total of £120 million over the next five years. This is after £352 million of cuts and 1,000 job losses since 2010. The council admits it cannot balance the budget by slicing percentages off departmental budgets. Instead there will be the closure or privatisation of whole chunks of council services.

Last year, TUSC gained the support of local unions such as PCS, GMB and the trades council and others to develop an alternative legal no cuts budget linked to a national campaign. Despite no elections in 2017, we will be mounting the same campaign in 2017.