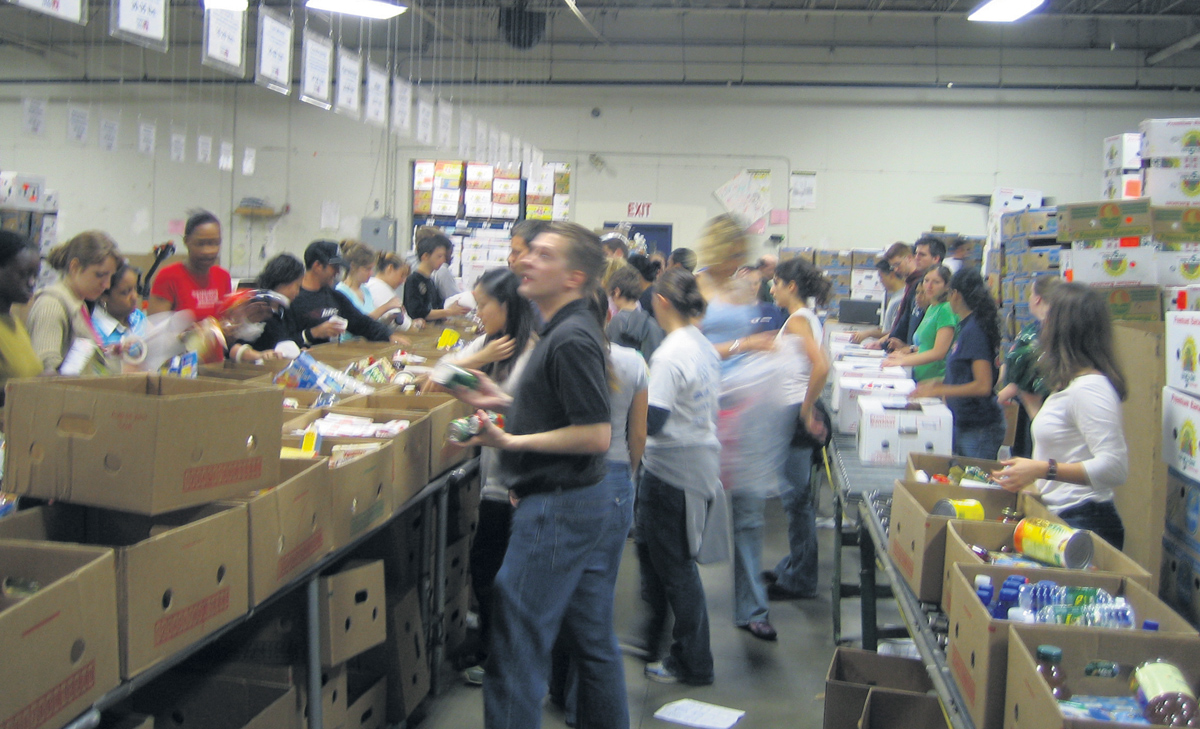 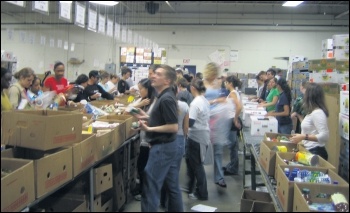 Hundreds of thousands of people are surviving and feeding themselves by using foodbanks in Britain today.

The recent film ‘I, Daniel Blake’ graphically showed the reality of life for those trying to get by after losing their job or their benefits, or those who are paid so little they have to use food banks despite having a job.

In 2012, I was sitting in the local pub after a Socialist Party meeting when our Blairite Labour MP for Walthamstow came round with a bucket and a smile: “donate to the local food bank folks?” she chirped.

This food bank collection was taking place at a time when huge spending cuts were being imposed on workers. 2012-14 were the years of the greatest carnage. Job losses and cuts to welfare provision and local government spending just seemed relentless. An onslaught of cuts and general austerity reigned down upon us with one million public sector jobs lost.

Later that evening my response to this MP’s request was condemned as “uncharitable” on social media.

The human misery this bucket wielding MP claimed she wanted to alleviate didn’t stop her from being absent for the vote on the hated welfare reform package of 2014 – the effects of which were portrayed so heartbreakingly in the film, ‘I Daniel Blake’. She was also absent for the vote on welfare cuts in 2015.

Not content in creating impoverishment and destitution in this country, she later went on to sanction the bombing of Syria – creating more desperate and destitute people elsewhere.

It is precisely this hypocrisy that all socialists should call out. We should have no shame in pushing the begging bowl of double standards firmly away.

It is not the existence of food banks that have created this situation, it is pro-austerity politicians who have championed them as an equal part of state provision. Quite deliberately.

Food bank provider Trussell Trust reported last year that they distributed more than 500,000 three-day emergency food parcels. Of the 500,000 given out, over 188,500 were for children. They say issues with benefits account for 44% of all referrals.

The working poor are also on the increase at food banks, driven there by problems such as low pay, insecure work or rising transport and energy bills.

Low pay is the second largest cause of a crisis, accounting for nearly one in four of all referrals.

Volunteers now run libraries, young graduates work for nothing as ‘interns’ and unemployed workers are expected to queue for food when they fall foul of the government’s benefit rules.

Part of the great rebellion that took place across Europe and in this country after the end of World War Two was an uprising against the humiliation of poverty.

It was a deep seated feeling that they were never going back to the misery of the 1930s. We should similarly reject the normalising of begging bowl provision by charities. This normalisation only gives cover to tax-avoiding billionaires.

There is a scene in the excellent Ken Loach film ‘I, Daniel Blake’ where a young lone parent is forced to use a food bank, due to problems accessing her benefits.

At the unemployed workers’ centre where I volunteer, we have a small food bank for Monday mornings, when the two local ones are closed, and for emergencies such as when a young couple couldn’t afford baby milk to feed their son because their Employment and Support Allowance (ESA) hadn’t been paid.

Benefit delays and sanctions are by far the main reasons people seek out food banks. People do not, as some politicians claim, use them when they’ve spent all their money on booze and fags.

They are used as a last resort, and people are often embarrassed and ashamed that they have become so desperate. You can only use food banks about three times a year anyway, and then you have to be referred by an agency such as social services or the job centre.

Use of a food bank is never an individual’s fault. It could happen to any of us and the government is happy for them to be seen as an extension of the welfare state.

Tory and Labour governments have also been keen to perpetuate the myth that welfare claimants are feckless and are incapable of managing their finances.

In my experience benefit recipients are some of the best budgeters you will meet. They have to be – every penny must count!

The vast majority of benefits staff hate the system as much as the claimants do. What is needed is a mass campaign made up of these staff, claimants, trade unions and others that will restore some dignity to the welfare system.

And a £10 an hour minimum wage, without exemptions, would tackle companies who boost their profits through ‘corporate welfare’ – tax credits for example – so that people do not have to claim in the first place #WeAreAllDanielBlake

I have experience of working in and being a client of a food bank.

A couple of years ago, due to a mental breakdown, I ended up out of work, and, due to benefit delays, using a food bank. Out of gratitude, I now volunteer at the food bank that helped me.

The biggest cause of use now is benefit delays. I can see food banks getting busier since the benefit cap has been lowered and living costs have risen, especially housing.

On the subject of housing, the most heartbreaking cases we see are homeless people.

We had a client who was living in a tent. This is bad enough in the summer, but in winter time it’s even worse.

Our food bank is grateful to schools and the general public for donations of food and financial contributions.

There is a scene in the film ‘I, Daniel Blake’ where someone who hasn’t eaten for days opens a tin of beans at a food bank and eats it there and then.

We in the Socialist Party demand an end to benefit delays and sanctions. We need a £10 an hour minimum wage and benefits that people can live on, not just exist on.