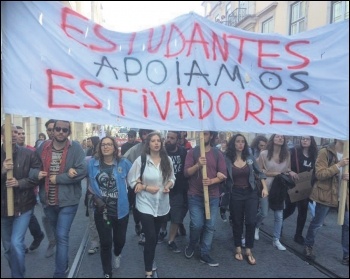 Socialism Revolucionário, the Socialist Party's sister party in Portugal, marching with other Left Bloc members in support of the Lisbon dockers, photo by Minerva Martins   (Click to enlarge)

This is as a result of our political positions and differences with the current leadership, as well as our role in building the party from below. This includes our opposition to the policy of uncritical support to the 'Socialist Party' minority government, and our role building the Left Bloc youth.

We are completely committed to the construction of the Left Bloc as a mass party that defends and represents the interests of workers and youth, and we fully endorse the words and spirit of its founding documents - that the Left Bloc should be a "popular, plural, combative left with influence".

SR officially applied to be recognised as a tendency inside the Left Bloc, a formal organisational procedure allowed and regulated in the statutory documents.

As the name implies, the Left Bloc is supposed to be a coalition of left-wing people and organisations to which SR, as a Marxist organisation, belongs.

Accusations of "infiltration" by the leadership against a group which was always open about its objectives are baseless and pernicious. They are akin to bureaucratic methods to stifle debate and restrict internal democracy that Left Bloc members value so highly.

Political differences with the leadership are not a reason to prevent the fighting left from joining an organisation that aims to be a union of militants and organisations that genuinely look for an alternative for capitalism.

SR comrades are among the most committed to building the Left Bloc from below, not just recruiting other activists but encouraging political discussion necessary to devise the correct analysis and methods of action.

With the potential to be a mass party of and for the 99% in Portugal, these undemocratic methods adopted by a tiny layer will only hurt the cause for which the Left Bloc was created.

This is about defending democracy and pluralism inside the Left Bloc, not just our democratic rights. It's a fight for the construction of the Left Bloc as a mass workers' party in Portugal.