Link to this page: https://www.socialistparty.org.uk/articles/24169

This article follows on from the article titled Unite general secretary election - fight the Blairites, vote Len McCluskey that was posted on the Socialist Party website in December. 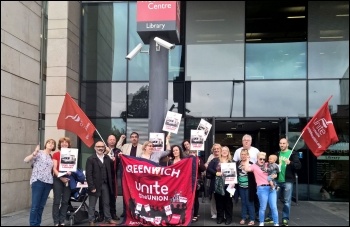 It's official! The bosses and their mouthpieces support the right-wing candidate Gerard Coyne in the current leadership contest in Unite the Union.

This is what the Financial Times, in endorsing Coyne, says in an editorial:

"The battle between Len McCluskey, the incumbent general secretary, and Gerard Coyne, a longtime organiser from ... the West Midlands, says as much about the direction of trade unions as the state of the opposition Labour Party" (5.1.16).

And they make their preference quite clear: "If Mr McCluskey is replaced, the dynamics of the whole labour movement would shift". The ultra-lefts who intend to stand against Len McCluskey should take note of this. They are playing into the hands of the bosses and their supporters in the press.

Despite the historically low number of strikes in Britain, the underlying embittered mood of transport and other workers, and even junior doctors, once considered part of the middle class, indicates massive discontent. The bosses fear this could trigger off strikes in other sections. Hence their wish for even tamer right-wing trade unions, the aim of which is to hold back the struggle.

The Len McCluskey leadership of Unite has been a big barrier to them, as our statement in the Socialist indicates.

And this is not a battle confined to the unions but has implications for Jeremy Corbyn's leadership of Labour, under siege from the friends of Coyne, the Blairite right-wing.

Unite has been generally supportive of Corbyn - and this is still absolutely necessary - but sometimes this has been to the neglect of making necessary criticisms of the political inadequacies of his programme and in particular of the actions of his supporters in Momentum who do not support the immediate introduction of mandatory reselection, despite the fact that the Unite conference passed a motion supporting this.

So keen is the Financial Times to see McCluskey replaced by Coyne that they are prepared to put aside their well-known 'Remain' position on Brexit:

"Coyne has now stolen a march on Mr McCluskey by embracing Brexit, calling for a rapid end to free movement of labour, and securing in effect British rights for British workers. This is a novel approach that borrows from the UK Independence party". As the old saying has it: 'Show me who your friends are and I will show you who you are'.

Coyne is the preferred candidate of the bosses and is prepared to demagogically seek support from anywhere, even from the right.

Contrast that with the recent call by Len McCluskey for employers to be able to recruit abroad only "if they are either covered by a proper trade union agreement or by sectoral collective bargaining".

UKIP, and the employers, won't be arguing for that approach, which rightly puts the question as one of defending and enhancing workers' rights.

Every Unite member who wishes for a fighting union, which Unite has undoubtedly been under the leadership of Len McCluskey and the executive of Unite, must firmly back his campaign for re-election.