Link to this page: https://www.socialistparty.org.uk/articles/24188 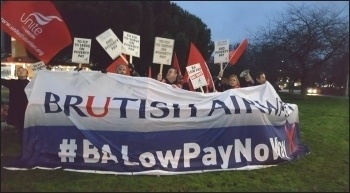 This has led to a situation where cabin crew working on the mixed fleet contract have basic pay starting at £12,192, plus £3 an hour "flying pay" totalling an average pay of £16,000, including allowances, each year. Mixed fleet cabin crew work on a combination of long and short haul flights.

A recent survey revealed almost half of new cabin crew had taken on a second job to make ends meet, with some saying they had to sleep in their cars between shifts because they could not afford the petrol to drive home. Two thirds admitted to going to work unfit to fly because they could not afford to be off sick. Yet the parent company of BA, IAG, is forecast to make profits this year of £2.3 billion.

These pay levels are some of the lowest in the industry. Cabin crew are being given no other option but to strike as British Airways management is refusing to engage in any meaningful negotiations. The determination of the cabin crew to win better pay and conditions is shown by the fact that over 800 cabin crew from British Airways' 'mixed fleet' have joined Unite since the start of the dispute over poverty pay. The Socialist Party fully supports cabin crew in this struggle. 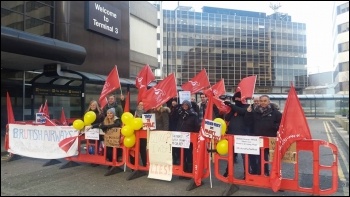 A very noisy protest took place outside Manchester Airport's Terminal 3 during the BA cabin crew strike. Unite members were chanting "low pay, no way!" and "pay rise, not lies" and getting support from passengers going in and out of the airport, including one who donated two boxes of chocolates!

The press have been reporting that the workers are on £21,000 a year and only interested in "shopping and cocktails". In reality, mixed fleet crew start on £12,000 a year and work incredibly long hours. In contrast, BA forecasts to make £2.3 billion in profit this year.

Union members rejected a pay offer of 2% in December. They are demanding a living wage, an increase of around 8%, and a scheduling agreement.

Mixed fleet staff work both short and long-haul flights and often don't have breaks in between. The protesters were confident and are up for the fight - Unite has just announced another three days of strike action on 19th-21st January. We should all give them our full support - say no to poverty pay!

This above report by Chris Newby was posted on the Socialist Party website on 10 January 2017 and may vary slightly from the version subsequently printed in The Socialist. The report by Becci Heagney was added onto the website on 11 January.