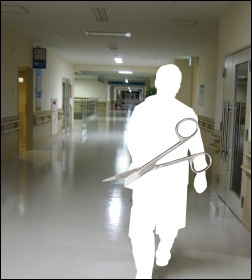 You'll be delighted to know that over the past year they've been quietly developing proposals under the deceptively fluffy title of 'Sustainability and Transformation Plans' (STPs).

These plans have been drawn up largely in secret with little involvement or consultation with health staff or patients.

They involve organisations which have previously been told they should compete with each other for resources and contracts, now being told they have to work together in 44 'footprint' areas across England.

These footprints combine local authorities, Clinical Com-missioning Groups, hospital trusts and other health bodies from across areas which have previously never worked together and have no legal status or obvious democratic structures.

The areas have finally released outline information about the plans for their patch which are still lacking in detail. The stated aims are to integrate services and improve healthcare in certain key areas like cancer care and mental health.

However, the main objective is they must achieve 'financial balance' and not be in deficit if they are to stand any chance of obtaining some of the funds the government is offering as an incentive.

What this amounts to is a financially driven cost-cutting initiative which will see a further slashing of £22 billion from the NHS budget.

The closures of more A&Es are written into some plans with 'reconfiguration' and 'centralisation of services' being the mantra. STPs will see significant reductions in GP surgeries.

As a result of seeing the STP in their area, a group of over 30 GPs in east London signed a statement calling for an immediate halt to the plans. They state the plans are not possible without severe cuts to services.

The plans to move services out of secondary care into primary care, while at the same time closing GP surgeries and using cheaper, unproven models of care, will leave primary care ripe for private sector takeover.

The NHS and social care are chronically underfunded and struggling to function. GPs will be unable to cope with work being shifted out of A&Es.

But this is exactly the intention of the government - to run down our treasured health service, underfund it, and blame 'lazy, overpaid staff' for failures and difficulties, then award contracts to their private sector friends to run services.

The government is already discussing the idea of introducing charging for GP appointments or A&E attendances, and asking people to bring proof of identity to access NHS treatment. This is one step away from having to present your health insurance card to prove you can afford your healthcare.

Pressure from campaigners has already forced councils in some areas not to sign up to the STPs. More opposition is needed to stop this final nail in the coffin for the NHS.