Sham Royal Mail pensions consultation should be met with action 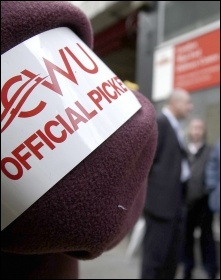 Royal Mail has announced a 'formal consultation' on the pension plans of its workers, following a national statement with 'proposals' sent to workers' home addresses.

The Communication Workers' Union (CWU) has replied with a statement to the company that any non-agreed pension changes will be met with a national strike ballot. Members of my branch supported this position unanimously at a gate meeting on 6 January.

Deputy General Secretary Terry Pullinger said of the consultation: "We have anticipated [it] for some months... we move from shadow boxing to the ring." In reality, following privatisation, it is less a boxing match and more a strategy of 'death by a thousand cuts'.

A pension dispute is likely to be followed by further cuts as the company looks to claw back the terms and conditions of employment we have won in the past, in search of profits and as an ideological attack on the CWU.

Between the lines in the cover letter accompanying the consultation pack, we see an indication that cost - or more specifically profit - is the driving force behind this attack.

The company states in the letter that any new deal will be in line with other companies' pension plans - signalling a race to the bottom on our pensions, justified in their opinion by achieving a stable return for shareholders.

The unanimous vote by members is a welcome sign that they understand the full significance and potential magnitude of this attack and stand resolutely in opposition to pension changes which have not been agreed by us as a trade union.

Action should link these attacks to the privatisation of the postal service and a campaign for renationalisation of the company and the wider postal industry.