We're sick of sham consultations - give us a real fightback 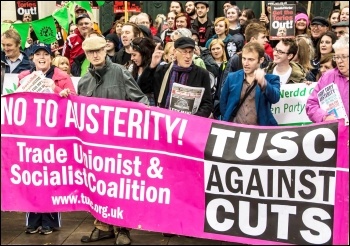 Your report on 4 January claims that just 230 responses have been received so far to Swansea Council's public budget consultation process.

Is it any surprise that the residents of Swansea are refusing to participate in the council's annual consultation, which effectively asks just one repeated question - which services would you prefer councillors to cut?

We have already seen £48 million worth of cuts over the past two years with another £16 million proposed for next year and a further £38 million by 2020.

Yes, Tory central government is responsible for cutting local government budgets but it's Labour councils across Wales, including Swansea, that are obediently implementing the Tory cuts!

Labour councillors shed crocodile tears and claim 'there is nothing we can do' and continue to devastate council jobs, services and the lives of the most vulnerable in society.

Local government trade unions, along with the Wales TUC, have called on Labour councils to refuse to implement these vicious cuts and instead set legal no-cuts budgets and launch a mass campaign to force the government to provide councils with the cash necessary to run our services.

Instead of acting as local managers and administrators of Tory cuts, Labour councillors should be standing up for ordinary people!

If Swansea council's consultation exercise included the question 'would you support a no-cuts budget?' then a positive response of tens of thousands would surely be on the order of the day!

Unfortunately, from past experience, such as last year's consultation where less than 0.6% of the population of Swansea participated, Labour councillors will justify making further cuts by claiming that this is what Swansea residents want. I don't think so!