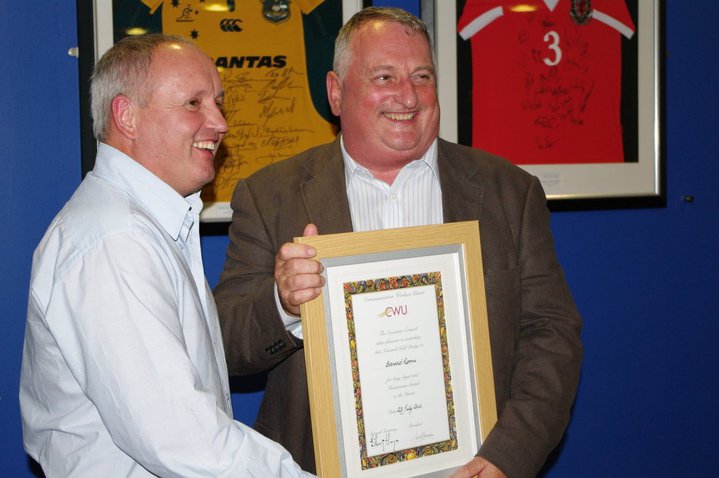 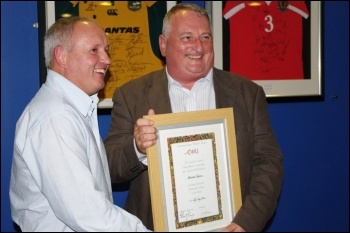 Bernard (right) being honoured at his retirement party in 2010 by CWU deputy general secretary Tony Kearns   (Click to enlarge: opens in new window)

Bernard Roome, a member of the Socialist Party and trade union activist, has sadly passed away after a long illness.

Bernard spent decades as a prominent Militant and Socialist Party member in Swansea where as well as serving for many years as branch secretary of the Communication Workers Union (CWU) he was also the longstanding secretary of Swansea Trades Council.

Bernard was a formidable trade union negotiator, a staunch defender of his members and a principled socialist.

To say that Bernard didn’t ‘suffer fools gladly’ would be an understatement in the extreme! The employers felt the sharpness of his tongue most frequently because he fought passionately for his trade union members’ terms and conditions. But right-wing trade union bureaucrats who collaborated with them also felt the hot breath of Bernard’s fury.

Crossing swords with Bernard was not an unusual event. He never hesitated to confront comrades who in his opinion made an unwittingly clumsy or politically incorrect remark but it was normally short, intense and forgotten about the following day. But that apparently prickly exterior masked on the inside an extremely caring and compassionate comrade. Many of us have often witnessed that sometimes hidden side of Bernard’s character.

There will be many comrades with numerous different memories of Bernard.

My own special memories include the 30 years we spent together as delegates from Swansea Trade Council to the annual conferences of the Wales TUC, normally travelling the five hours up to North Wales in his car, planning our interventions for this overwhelmingly right-wing dominated trade union conference.

With one eye on the road and one eye on the agenda, Bernard’s ex-army driving skills on the mountain roads of North Wales were a frightening reminder that we should have really caught the train!

Our discussions during those journeys were normally the only preparation Bernard did before delivering his powerful speeches at the conference which either came passionately from the ‘top of his head’ or literally from the ‘back of a fag packet’ (I saw him writing them)!

The sight of Bernard storming down the aisle to the rostrum to raise a ‘point of order’ terrified even the most authoritarian president of the Wales TUC.

I am certain that his comrades at the many conferences of the CWU and its predecessors also remember the exhilarating experience of witnessing Bernard in full flow.

Bernard’s political and trade union home was undoubtedly in Swansea where he will be missed enormously and fondly remembered by the best activists in our movement but he also left his unique mark both across Wales and Britain as a respected trade unionist and socialist, serving on the General Council of the Wales TUC and the National Executive of the CWU.

Like many of our most prominent Militant activists Bernard was expelled from Gower Labour Party during the Neil Kinnock witch-hunt, which he regarded as a ‘badge of honour’ for defending his socialist principles against the political minnows that expelled him.

As expected, he also played a key role in the tremendous anti-poll tax victory and as Chair of the Welsh Federation of Anti Poll Tax Unions was a commanding public representative for that movement.

After retiring, Bernard moved to Surrey to join his CWU comrade and partner Grace, before they eventually retired to Spain where it was hoped the more favourable climate could assist Bernard’s health.

In the Valencia area, Bernard still assisted in distributing our leaflets on demonstrations and participated as much as possible in the work of the Socialist Party’s sister organisation in Spain, despite a growing but limited understanding of the language and his deteriorating health.

Tragically, Bernard and Grace’s time together in their new home has ended far too early. We send our deepest condolences to Grace, the rest of Bernard’s family, as well as his many comrades and friends.

The Socialist Party and trade union movement mourn the passing of Bernard but we will also celebrate his life by continuing to agitate and organise for the socialist future he fought so hard to achieve.

The Grand Hotel is offering a discount to anyone attending this event and wishing to book accommodation. Please ask for details if booking.