Mass protests across the USA 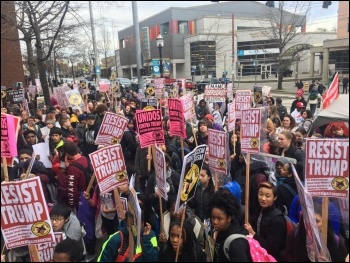 These were the largest simultaneous protests ever recorded in US history with millions taking to the streets over two days in a show of defiance against the inauguration of billionaire bigot Donald Trump. The Washington march alone on 21 January numbered half a million, with up to 750,000 in Los Angeles, 500,000 in New York City, and 250,000 in Chicago... the list goes on!

But it's clear from the following reports of Socialist Alternative members (US cothinkers of the Socialist Party) that there is also a thirst for ideas and organisation to fight back against Trump and the Republicans' attacks on the rights of women, minorities, trade unionists, migrant workers, etc. 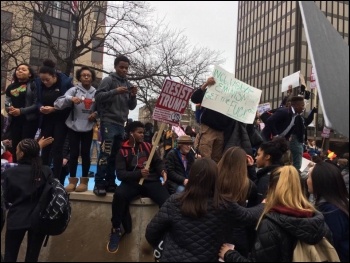 Chicago responded with an incredible weekend of resistance. "Resist Trump" demonstrations were held on 20 January (J20) and the following day the Chicago Women's March was one of world's largest with 250,000 people attending!

The women's march became so large that no actual march was possible. Instead, demonstrators took over Chicago's downtown loop for hours in a tremendous display of solidarity and shut down business-as-usual with a festival-like mass gathering.

The failure of Democratic Party corporate politics in the election cost working people dearly and it became even clearer that it would take a genuine grassroots and radical opposition to fight the right.

For several weeks, Socialist Alternative worked with a strong coalition of groups under the banner of the Movement for the 99% to organise a #J20 rally and march.

The organising group's commitment to politics independent of the two party system was vindicated when the J20 rally and march was effectively hijacked and sabotaged by deceitful representatives of the Chicago Democratic Party machine.

Garcia, despite presenting himself as a "Berniecrat," refused to take up any of the concrete initiatives supported by Bernie Sanders during his presidential candidate bid. Instead he steered the passage of a sales tax increase on Chicago's working class and poor just after his race.

In spite of the sabotage, thousands of Chicagoans marched on Trump Tower, denouncing Trump's agenda of racism and sexism. Marchers expressed disgust not only towards Trump, but toward the establishment: at one point demonstrators surrounded a police car, chanting "16 shots and a cover-up!", calling out Democratic mayor Rahm Emanuel for his criminal concealment of the police execution of Laquan McDonald.

Our movement will need to build on these tremendous protests with powerful ongoing struggles and mass civil disobedience, while developing strong demands and independent democratic structures.

Many attendees were eager to discuss socialism and our strategy to defeat Trump, and Socialist Alternative passed out over 2,000 flyers for a mass meeting about the way forward for our movement. 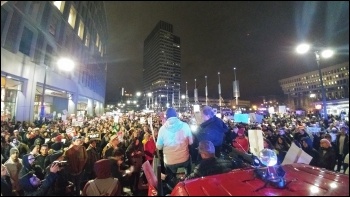 Over 5,000 people came out into the streets of Boston photo   (Click to enlarge)

The demonstrations kicked off on J20, including a walkout of 150 striking Northeastern University dining hall workers from Unite Here Local 26, in a show of working class resistance to Trump's anti-immigrant, anti-worker and pro-billionaire agenda.

Over 4,000 people gathered for a rally later that evening, chanting loudly about women's and immigrant rights and healthcare, and showing the determination of the movement to unite and defend those who are facing Trump's most immediate attacks.

Socialist Alternative organised the major evening rally with several co-sponsors and had members talking to people about political strategy for the movement and the need for a new mass political party independent of corporate cash and interests.

The next day the women's march brought 125,000 people together at Boston Common for what was perhaps the biggest demonstration in the city's history! Socialist Alternative was at it again distributing leaflets on our strategy for fighting Trump's sexist agenda.

We talked with people about how sexism is built into the very essence of the capitalist system with the 1%'s constant efforts to reduce social spending and increase profits.

Boston Socialist Alternative is bigger and more ready than ever to build the resistance against Trump and the socialist movement! 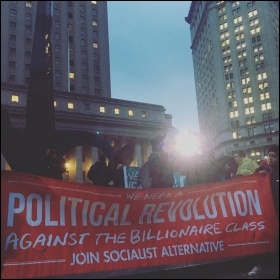 There were three days of protests in New York City. 25,000 turned out to a rally organised by Michael Moore on Thursday night (19 January), 1,500 turned out to a protest Socialist Alternative initiated (J20) - which marched to the Trump building at 40 Wall Street to highlight Trump's ties to the big banks - and up to 500,000 for Saturday's March for Women.

Despite the fact that most colleges in New York were still on winter break, Socialist Students managed a small walkout from two schools on inauguration day, including a high school in Manhattan and winter quarter students from Borough of Manhattan College.

2,000 students were crammed into Sproul Plaza at the UC Berkeley walkout rally on J20. As one after another speaker condemned Trumps' bigoted tide, the crowd got distracted by an invading, chanting army of youth. Several hundred Berkeley High School students had arrived and the college students' roar of approval circled the rally.

The Oakland Women's March on J21 was a huge, popular middle finger to all those that want to turn the clock back further against women's equality.

100,000 women, men and kids, formed a gigantic sea of defiant picket signs. The Socialist Alternative truck got huge approval for demands for free healthcare, unions, unity of the 99% and for the right to choose.

Marchers came up to our truck to take selfies in front of our Join the Socialists banner as the SA truck pumped out its dance music along the march. 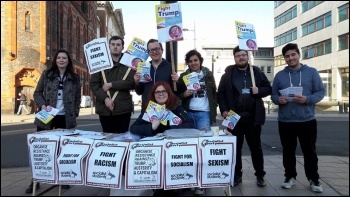 There were numerous anti-Trump demos in England and Wales on 20 and 21 January in solidarity with mass protests in the US. Socialist Party members mobilised for and organised many of these, as a selection of reports shows.