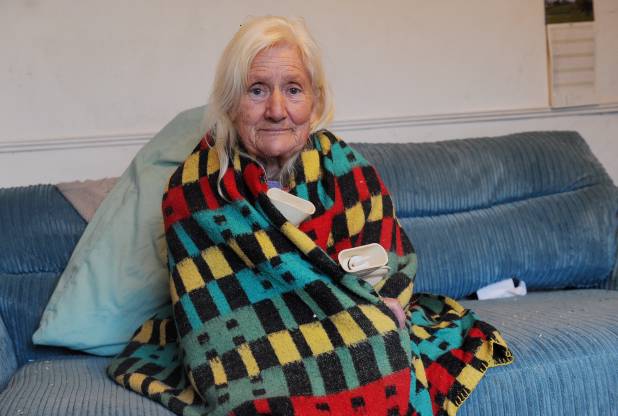 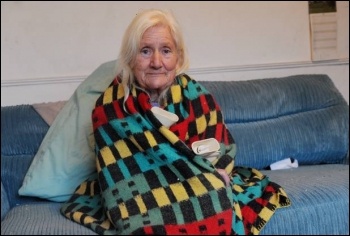 74-year-old Shirley Walsh had her heating cut off and couldn’t afford to replace it   (Click to enlarge: opens in new window)

A headline article from the Hull Daily Mail (13 January) exposes the cold, callous brutality of the Tories and their system.

74-year-old pensioner Shirley Walsh, having had her gas supply disconnected due to a leaking gas pipe on her property, was unable to afford the repair bill. If it wasn’t for the generosity of neighbours providing hot water bottles and electric heaters Shirley would have most probably frozen to death by now!

Compare Shirley’s plight to the OAP residing at Buckingham Palace who is having a £369 million upgrade paid for by the taxpayer. The millionaire press owners can only appeal to the generosity of the public to help get Shirley’s gas supply reconnected.

Instead of capitulating to the right wing, it’s high time Corbyn grabbed the bull by the horns, kicked out the Blairites and mounted a massive, bold, socialist campaign, including the nationalisation of the entire energy industry.

Yours whose blood is about to boil,

Who said “cutting the corporation tax rate to 17% makes for bad politics and an uncertain economic return”? The Socialist? The Guardian? Wrong and wrong. In fact, it’s the free-market fundamentalists of the Economist!

As they point out, corporation tax was 52% in the 1970s, and Teresa May is now threatening to take it down to as low as 10% to woo business if Brexit terms are harsh.

But for the Economist this causes a headache. While they oppose the ‘burden’ of ‘interference’ in the market such as the Tories’ fake ‘living wage’, they’re not stupid enough to miss that the tax cuts under the Tory-Liberal coalition “deprived the government of £8 billion a year”! The further announced cuts will “cost another £3 billion or so a year”!

According to their neoliberal theory, tax cuts boost investment to kick-start economic growth and job creation. But the Economist confirms what the Socialist has noted for years: “The profitability of private-sector firms is at its highest level since 1998, yet capital spending is stagnant.”

For the Economist this is puzzling. But the Socialist has a simple solution – scrap the profit motive by bringing the key sectors of the economy into public ownership under democratic workers’ control and management.

The ordinary people can decide how to invest to satisfy everyone’s needs, rather than those of the 1%.

Brexit ‘hard’ or ‘soft’, it won’t matter – without socialist action, the only people who are going to be made to suffer will be the working class.

Many years ago we were told gas was going to be free because loads of it had been discovered in the North Sea.

Many years on it has been anything but free.

And now we are running out fast, with those who have made the most profit from our gas allowed to move onto other, more dangerous ways of getting their profit as gas exploration moves inland, under our houses, under our park’s and natural sites of beauty; licences galore given freely to the future polluters they call the ‘fracking’ companies so they can make cracking profits and leave us all to clean up the mess they install.

Post Office privatisation is coming thick and fast with profits in sight for more capitalist leeches to amass, as they wait to plunder a service being driven under by past profiteers who stand guilty of the wilful destruction of a once world-class service, built by the many only to be destroyed by the few.

Of those who look to profit from the Post Office demise we do have an insight, from their workers’ eyes, that tells a story of legalised robbery, punitive punishments; money stolen at the drop of a hat, from workers’ salary leaving them very little to feed even the cat – due to the littlest of mistakes, workers are made to pay.

If there is such a thing as paid slavery then it’s being practiced throughout the UK today.

Rebel with a Cause, Rotherham