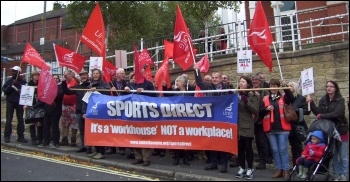 The news that two brothers were jailed at Nottingham Crown Court for trafficking vulnerable people to work at Sports Direct in Shirebrook, Derbyshire, will have shocked and angered many.

The 18 victims were targeted precisely because they needed money badly, one needing to fund treatment for his desperately ill mother back in Poland.

The men were told of jobs in the UK which could pay £300 a week. In reality, they were given a fraction of this, for working long hours, with the traffickers pocketing the rest.

They were also promised decent accommodation. What they actually got was a chronically overcrowded, dirty flat in a shared house with others.

It's probably true that Mike Ashley, the boss of Sports Direct, didn't know about this trafficking. However, he's made billions from the exploitation of his workforce through practices such as the use of zero-hour contracts and paying less than the minimum wage.

The Socialist Party campaigns to end exploitative, Dickensian working conditions and practices. We demand an end to zero-hour contracts. All workers must have trade union rates of pay, full employment protection, and sickness and holiday rights from day one of employment.

NSSN action in the North East