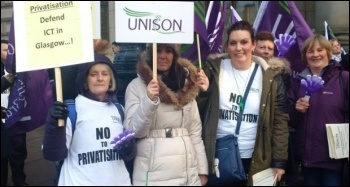 The Greens have posed as an “anti-austerity” alternative, but for many workers and young people are now exposed. They have supported the SNP minority government in slashing local council funding by around £170 million, and continuing the massive underfunding of the NHS, education and social care services.

Leading Scottish Greens are presenting the £160 million reduction in the SNP’s original cut for councils of £327 million as a big victory.

The Scottish Trade Unionist and Socialist Coalition (TUSC) asks: why did the Greens not refuse to support the SNP’s cuts budget, and demand instead that they fully fund public services? We point out that in councils such as Glasgow and Edinburgh the Greens have just proposed alternative cuts budgets rather than put forward a fighting alternative.

TUSC supports the Unite and Unison unions’ calls for the Scottish government and councils to set legal no-cuts budgets. Our candidates in the forthcoming council elections will put forward a 100% anti-austerity fighting socialist programme, in contrast to the SNP, Labour and the Greens.

We call for councils and the Scottish government to come together, using financial tools including reserves and borrowing powers, and cancelling historic debts, ‘PFI’ and ‘PPP’. TUSC would also use tax-raising powers to shift the burden of income taxation onto the very highest earners.