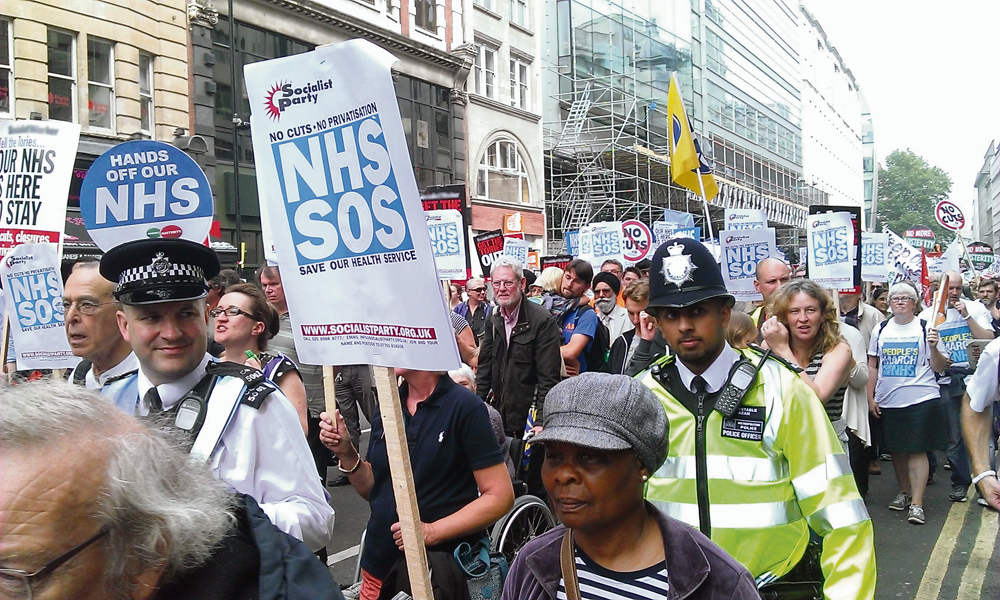 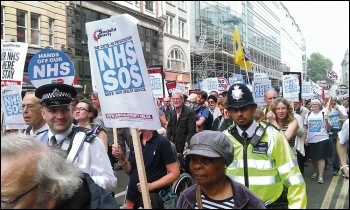 Marching to save the NHS, photo Paul Mattsson   (Click to enlarge: opens in new window)

Our NHS is collapsing. How dare Prime Minister Theresa May deny claims by the British Red Cross last month that the NHS is experiencing a humanitarian crisis?

After years of deliberate privatisation, funding cuts and outright sabotage under New Labour, Lib Dem and Tory governments, the NHS is chronically understaffed, underfunded and under-resourced.

One in six A&E departments in the UK is at risk of closure. Senior NHS officials have warned that elderly and disabled people could face being denied hip and knee surgery because of funding shortages.

Nurses who speak to Socialist Party members at our campaign stalls frequently tell of being left alone to care for whole wards of patients due to staff shortages.

And now we’re heading towards a two-tier health system. A GP surgery in Bournemouth will allow paying patients to jump the queue to be seen and have longer appointments.

Because of savage Tory spending cuts in social care, discharges of hospital patients are often delayed because there is nowhere that elderly, disabled or chronically ill people can be safely discharged to.

Totally inadequate care services up and down the country means that the pressure on hospitals is increasing even more dramatically.

It’s now clear to everybody that the Tories are hell-bent on wrecking our NHS and selling it off to their big business mates. They don’t think people like us should get free healthcare and they are doing everything they can to dismantle the NHS.

It’s up to us to stop them. On 4 March, we will march in London to save our NHS. This demonstration, called by a coalition of local health campaigns, is now officially being supported by Unison, the trade union which organises most health workers. But we need more.

Trade unions and NHS campaigners need to build demonstrations, strikes, direct action and community campaigns to stop the Tory wreckers in their tracks. Let’s be clear, we can get rid of this weak, divided Tory government – and we must!