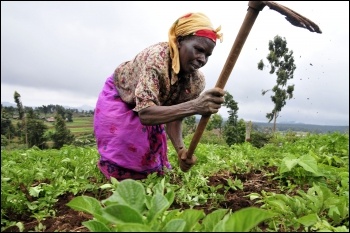 Twenty-four times as much money is looted from poor countries in the global south than is sent in aid, according to financial transparency campaigners GFI.

The money sent out of poor countries outstrips money sent into them by an eye-watering $3 trillion.

Countries in the OECD, which includes most advanced capitalist economies, give $125 billion a year in aid to the rest of the world. In total, they send $1.3 trillion over their borders, when investments and other transfers are included.

But that figure is dwarfed by the $4.3 trillion sent back.

A hefty chunk of the cash is interest on debt, and goes straight to the big western banks. Many countries don't stand a chance of ever paying their original debts back. Reported profits for foreign investors make up another big slice.

But the majority - $13.4 trillion since 1980 - is profits smuggled illegally out of poor countries by big corporations and sent to tax havens, many of them based in British territories like the Virgin Islands.

Profiteering and tax avoidance by the super-rich in countries like Britain are part of the reason we don't have the money needed to fund public services. Public sector union PCS estimates Britain loses £120 billion of tax money every year. Exactly the same robbery by the rich keeps the poorest people on the planet poor.

Right-wing politicians and populists try to set ordinary working class and poor people from different countries against one another, with claims that foreign aid is the reason we don't have enough money to run our public services.

But in reality we share the same enemy: the tiny number of super-rich who exploit us all.

When the Panama papers scandal hit the headlines, Jeremy Corbyn said that British territories should be stopped from operating as tax havens. That's good, but unless we go further British companies will just find new methods of exploiting the poor around the world.

We should nationalise the biggest companies that dominate our economy to stop the greedy capitalists who run them now from ripping us all off. With socialist policies like that, a post-Brexit Britain would be far from isolated in the world.