Link to this page: https://www.socialistparty.org.uk/articles/24783 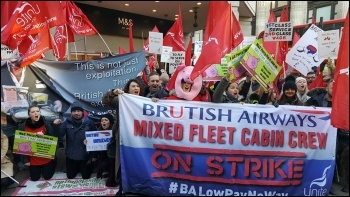 "BBC where are you?" was chanted by a lively and very loud Unite protest of striking British Airways cabin crew outside the Corporation's London HQ on 23rd February. They then jumped on the tube to ITV's studios on the South Bank to wave banners and flags as 'This Morning' was being broadcast live!

The low-paid workers are furious that the main terrestrial broadcasters have virtually ignored their dispute. The crew finished a four-day stoppage on Saturday 25th February; The next planned strike - seven days from 3rd March - will take the number of strike days up to 26 this year.

The workers on the newer Mixed Fleet contract are on just £12,000 a year basic pay, with terms and conditions also totally inferior to the original agreement. Crew talk of having to sleep in their cars because they can't afford to drive home! Yet the response of 'Brutish Airways' is to withdraw staff travel entitlement and bonuses rather than properly negotiate with Unite.

To make the point about BA's intimidation tactics, the protest moved on to Acas to call out the company. Yet BA's parent company IAG increased its profits last year by 64% to €1.4 billion and infamous CEO Willie Walsh earned €8.8 million! Isn't this yet more evidence that BA should be renationalised?

But these workers aren't going to bullied. Nearly 1,000 new members have joined the union since the start of the action, taking the membership to nearly 3,000. Management continues to refuse to talk properly to resolve the dispute. Rob Williams from the National Shop Stewards Network and Helen Pattison from Youth Fight for Jobs joined the protests to give solidarity and support.

This version of this article was first posted on the Socialist Party website on 27 February 2017 and may vary slightly from the version subsequently printed in The Socialist.