Biggest ever protest by Orgreave campaigners outside Home Office 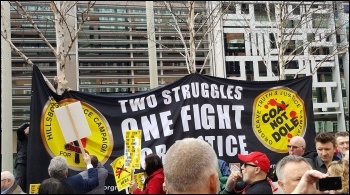 The Orgreave Truth and Justice Campaign held its biggest and noisiest demonstration yet outside the Home Office in London on 13 March in protest at Home Secretary Amber Rudd's decision not to hold a public inquiry into what took place on the 18 June 1984 - at the 'Battle of Orgreave'.

Many miners were arrested and falsely imprisoned by the state for nothing more than defending their communities and the right to work. Later they were acquitted at Sheffield Crown Court.

Amber Rudd compared the state collusion after Orgreave to the victims of the Hillsborough disaster. Her remark "nobody died at Orgreave" was sickening.

So we organised the protest to emphasise we are not going away and we want to be heard.

The PCS samba band performed and we were joined by various other miscarriages of justice campaigns, including representatives of the Shrewsbury 24 campaign.

After the last speaker all supporters moved their banners to block the road for a short time, designed to humiliate Amber Rudd and recreate the road blocks used against striking miners in 1984-85.