Build a mass workers' party that fights for socialism 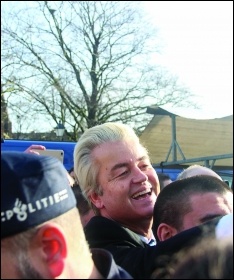 The most important feature of the elections is the colossal defeat for the outgoing austerity coalition government of the Liberal Party (VVD) and the Labour Party (PvdA).

The VVD and the media present the Liberal's 33 seats as a 'victory'. But the VVD lost eight seats and its coalition partner, the Labour Party, was reduced to a rump of nine seats having lost 29. Neoliberalism has suffered a serious election defeat.

Another important feature is that although it came second, the extreme right-wing Freedom Party (PVV), led by Geert Wilders, remained stuck on 20 seats.

Even with the strong winds of the asylum seekers crisis of 2016, Brexit and Trump's victory in its sails, the PVV failed in its aim to become the largest party.

It has more seats than in 2012, when it had supported the outgoing government, but in comparison with its high point in the polls the results were disappointing for Wilders.

Wilders poured out endless hateful racist tweets and remarks during the election, including his shameful call for "less Moroccans" in the Netherlands.

His campaign consisted of tweets and flying visits to a couple of cities. He did not try to organise a mass rally. More often than not there was more security people and press than PVV supporters around Wilders during his visits.

His bluff was called in a debate with VVD leader, Mark Rutte, when Wilders admitted that his demand for the policing of the 'use' of the Koran would never materialise.

But the lack of a big breakthrough by Wilders does not mean that the danger of the extreme right is over. Other parties adopted some of his clothing including the VVD. Moreover, the PVV is the second largest party and so the right-wing threat remains.

There is no reason for the EU leaders to congratulate themselves that the right-populist tide in Europe has been checked with the Dutch election results.

The Green Left, Christian Democrats and the Democrats 66 profited from the mass exit of voters from the Labour Party and the VVD.

The Green Left (GL), now a liberal party with a green edge, gained most - partly through the popularity of its new young leader, Jesse Klaver. Its vote jumped from 2% to 8.9% (its previous highpoint was 7.3% in 1998).

Although the former Communist Party was one of its co-founders, the GL does not put forward clear pro-working class policies let alone talk about socialism. The GL helped the last coalition government to win majority votes in parliament, including sending a Dutch military mission to Afghanistan.

However, many workers are not enthusiastic about GL. One of the reasons for this is the fact that GL has been part of the political establishment for years. Those Dutch workers who have experienced the downside of globalisation and neoliberalism are concerned with the notion of 'progress' under capitalism that GL espouses.

The Dutch Socialist Party's (SP) vote fell slightly, to just over 9%, losing one seat. It failed to make any headway, despite years of austerity governments. Voters failed to see the difference between the SP and the many other opposition parties.

The potential of the party was clear in 2006, when it won over 16% of the vote and 25 seats. This potential still exists but to realise it the party needs to change course.

A socialist programme is the only way to get the SP out of its present stagnation, otherwise it will enter a phase of crisis.

The VVD will try to continue its austerity government with new parties but not without difficulty.

All possible coalitions have the disadvantage of involving complicated compromises and a lack of direction. New elections are not excluded, but the VVD will be concerned that another election could lead to a comeback for Wilders, creating a new crisis.

Workers in the Netherlands lack political representation. In spite of its stated intentions, the Socialist Party leadership failed in this respect. It is too eager to enter into coalition at local government level and makes little effort to mobilise against cuts.

None of the 28 parties that participated in the election are going to change the system. Dutch workers and youth will have to do that, organised in unions at work and in a broad political socialist alternative, locally and in government, linking up with worldwide protests against austerity, Trump, and capitalism in general.

A new workers' party is needed, which combines defence of workers' interests with the struggle for a socialist society.

During the election a diplomatic row broke out after the ruling Liberals banned Turkish ministers from entering the country to address Turkish referendum rallies.

Turkey's president Erdogan wants to consolidate his authoritarian regime by changing the constitution in a forthcoming referendum and is keen to mobilise votes from Turks resident in EU states.

Rutte's increasingly racist Liberals were fearful of losing votes to Wilders' party who would use such referendum rallies to fuel anti-Muslim/migrant prejudice.

RMT defeats ScotRail bosses: The guard stays on the train