Yemen: workers and their families left to starve by multinational companies 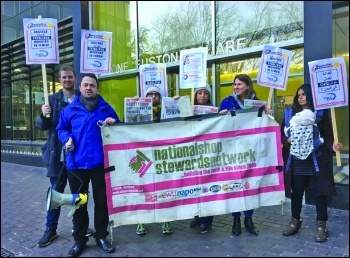 It is in the nature of capitalism to turn every human disaster into an opportunity to make a profit. The war in Yemen has not only destroyed the lives of tens of thousands of civilians but created a landscape whereby multinational corporations can more easily behave like outright gangsters in robbing their workers.

G4S was named a "serial abuser of human rights" by the British trade union Unite.

Total and G4S halted most of their activities in Yemen in 2015, but did so with utter disregard for the prevailing labour legislation.

Total and G4S left without giving any compensation, nor even any notice to the 208 security guards who were working under their authority.

They assumed they could get away with it thanks to the international media blackout on Yemen and to the dysfunctional and collapsing state infrastructure in the country.

Following a judicial procedure in December 2015 before the Labour Arbitration Commission of Sana'a, Yemen's capital, the premises of Total were seized.

The two companies were ordered to pay the workers' wages and other monies until the termination of their contracts. The guards were ordered to continue protecting Total buildings until this materialises. But the court decision was wilfully ignored by both companies.

Some workers, under duress, have given up the struggle. However, 115 of them have continued to work, unpaid, and to fight for the wages and other rights they are entitled to.

They have stood firm in their heroic struggle, for example by holding several street protests in Sana'a, despite the ban on demonstrations imposed by the Houthi rebels who took power in the capital at the end of 2014.

They have also courageously resisted death threats and kidnappings by armed gangs directly connected to the management of these companies.

Last December, Mohammad Alzubide, Ali Al Sanhani and Abdurhaman Kieran, three security guards in their 20s, were shot dead by an armed gang as they were working on court-mandated duty protecting a Total compound in Sana'a.

According to the guards who were eye-witnesses to the December shooting and barely escaped death themselves, the leader of the armed gang is Abou Mustafaa Mohammed Jameel, who happens to be the current vice-general manager of G4S Yemen.

With him was allegedly another man called Mohammed Kilah, a relative of Faris Sanabani, the de facto current owner of G4S Yemen. Sanabani is a rich magnate with a British passport, and former press secretary of the ex-Yemeni president, Ali Abdullah Saleh, who helped the latter's clan to stash its money abroad.

G4S denies any links with the entity presently operating under its name and logo in Yemen. This may be true, but it does not exonerate the original company from its responsibilities - nor does it explain why G4S has not sued the fraudulent company.

There is growing outcry about the Total/G4S case, spearheaded by the CWI's involvement in an international campaign of protests.

What is happening to the Total/G4S workers in Yemen is inherent in a system where labour is exploited to inflate the wealth of private corporations.