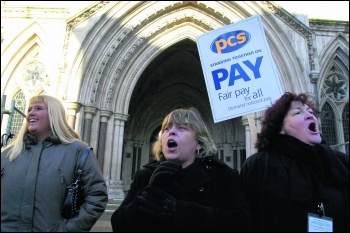 By 2020, with the continued imposition of pay caps, and rising inflation, the average pay of public sector workers will be £1,700 lower than in 2010. The key point here is the continued operation of the pay cap and the need for the public sector unions individually and collectively to challenge its imposition.

Last year's TUC conference committed to actively supporting and coordinating strike action across the trade union movement against the pay cap. This motion was put forward by PCS which has recently called upon the TUC to implement this policy.

PCS commissioned its own independent research upon which to base its pay claim for 2017. This shows that since 2010 the value of civil service average earnings has fallen in comparison with prices by 8%.

Workers can contrast this with the pay of architect of austerity George Osborne, Tory chancellor from 2010-2016. In addition to being an MP, he makes over £1 million a year from investment firm BlackRock and speech making, and this is before he starts his latest job as editor of the London Evening Standard.

If the pay cap continues to the end of the decade, average civil service pay will fall in value by more than 20%.

Against this background of savage attacks on our members' pay and living standards, the union's national executive committee has put to the treasury a pay claim for 2017. It includes an end to government-imposed pay restraint, a significant pay increase - above the rate of inflation - of 5% or £1,200, whichever is the greater, and a living wage of at least £10 an hour.

Our claim also contains a demand for a return to national pay bargaining. Our members reject and can't understand why the pay of a worker in one department or agency can vary by up to £5,000 with a worker in another department on the same grade and doing the same job.

We want common pay and grading across government services and equal pay for work of equal value. In support of our claim, and to publicise the effects of pay capping on our members' living standards, the PCS national executive committee has designated 31 March as a day of action on pay.

Pay capping is an issue across the public sector, which is why we call upon the TUC to coordinate action against the pay cap. Public sector unions should also cooperate at a local level in joint activities on 31 March and raise the call for national coordinated action.

I am confident the day of action will get a big response from our members, reflecting their anger at the real wage cuts and their confidence in the PCS Left Unity leadership to fight for members' interests.