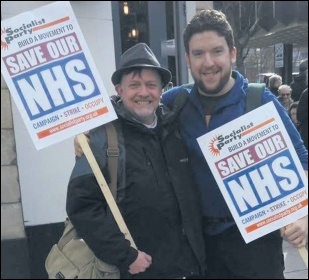 Steve won the drawing of lots so his election address will appear first in the mayoral booklet that will be posted out to all 220,000 voters.

At the time of writing, he is in the lead in a small online poll run by Doncaster Free Press.

More importantly, Steve is winning support on the ground.

Transport union RMT is a component of TUSC alongside the Socialist Party, and the local RMT rail branch is strongly backing Steve. TUSC backed the Northern Rail guards on their 8 April picket line before petitioning in the town centre to keep guards on the trains.

As chair of the local health workers' branch of public sector union Unison, Steve has the backing of Care UK workers who three years ago took 90 days' strike action against pay cuts and the privatisation of the NHS.

And this is before the 'sustainability and transformation plan' cuts are implemented.

On the streets, there is no enthusiasm for the incumbent Labour mayor, Ros Jones. Members of the public have described her to us as a "nodding dog" who has "rolled over and carried out the Tory government cutbacks."

There is a real feeling that Labour in Doncaster is not standing up for local people. Significantly, several Labour Party members have said that they will be voting for Steve.

But where Labour candidates back Jeremy Corbyn, like in Steve's own ward of Conisbrough, then TUSC is not standing candidates against them for the council seats.

With only five other mayoral candidates, TUSC is getting more media coverage than in the past.

Steve's even been invited to hustings at the Doncaster Chamber of Commerce conference. It will be interesting to see how TUSC's campaign to make Donny a £10 an hour minimum wage town goes down with 200 businesspeople!

At the same time, many smaller businesses are being clobbered by the big banks - including by their local branch closure plans. The Tories' national business rate revaluation privileges multinational companies like Amazon.

And Jeremy Corbyn has rightly attacked big businesses forcing smaller businesses under by paying invoices late. Public ownership of banks and big business under democratic workers' control and management could sort a lot out.