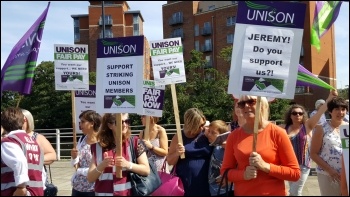 Following negotiations and a ballot of Unison members the Derby teaching assistants' dispute ended on 5 April. The members voted nine-to-one to accept the offer from Derby council.

The turnout for the ballot was 38%. A three-part deal has been struck between the council, schools and teaching support staff.

The teaching assistants have been in dispute with the Labour council since last summer following changes in contracts which resulted in severe cuts (up to 25%) in pay and movement to term-time working. Over the past nine months there has been a huge escalation by the workers and their supporters with a series of demonstrations and strikes steadily increasing from one-day to five-day actions and lastly an indefinite walkout.

The council has said that the £1.5 million compensation package will not mean cuts in other areas. Derby council has already announced cuts of £14 million for this year.

While forcing concessions, the deal will be regarded by some as disappointing and unsatisfactory, particularly the derisory compensation payment and lack of job security.

The long struggle against Derby council has been a huge learning experience for the teaching assistants in many ways, and the solidarity they have shown will be tested in coming months during negotiations on the flexible 52-week year.