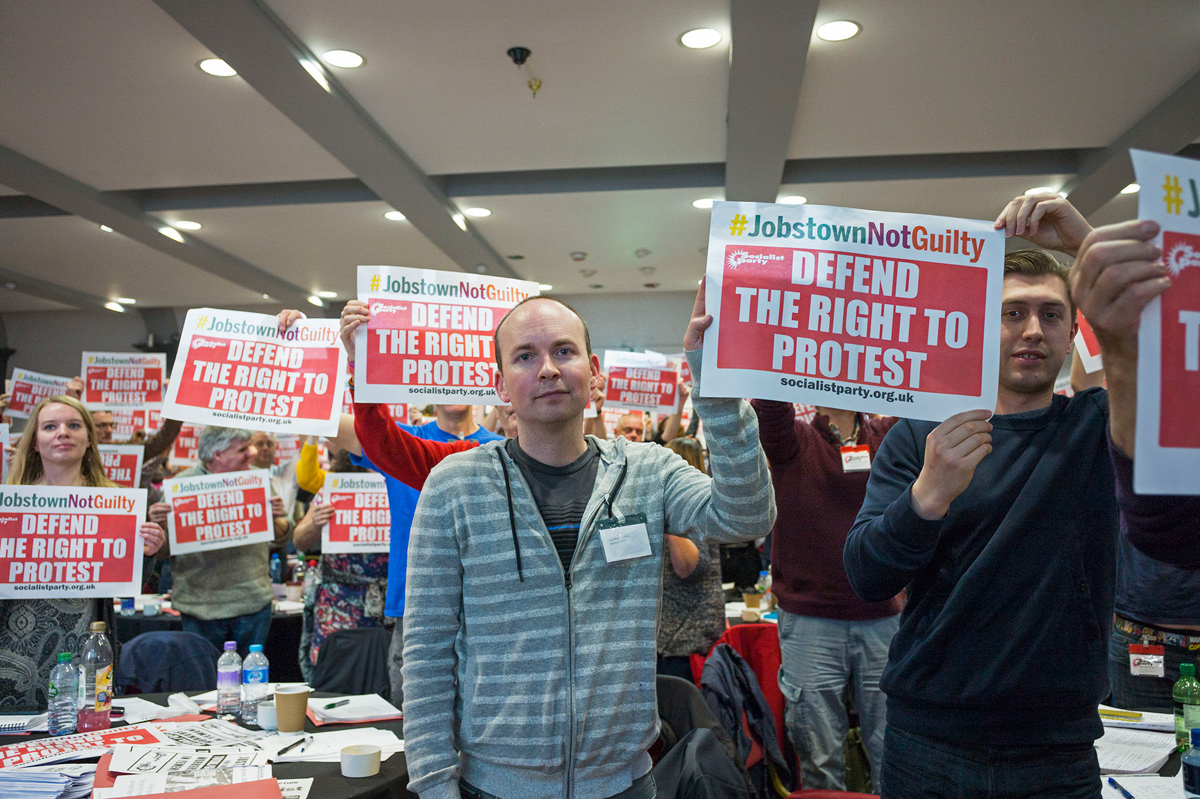 Protest is not a crime

Back Jobstown Not Guilty 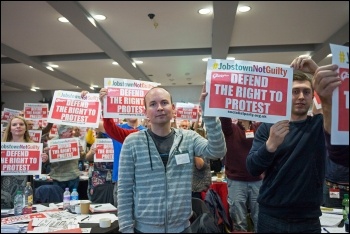 Paul Murphy speaks to the Socialist

On 24 April the biggest political trial in Ireland for a generation will begin. Seven people stand accused of ‘false imprisonment’ of then deputy prime minister Joan Burton during an anti-water charges sit-down protest and slow march in Jobstown, Dublin, in 2014. A 17 year old has already been found guilty of this charge in children’s court and a further eleven protesters face related charges in the future. A guilty verdict would hold a maximum sentence of life imprisonment.

Among the first batch of adult defendants is Paul Murphy, member of the Irish parliament and of the Socialist Party’s Irish sister organisation. Ian Pattison spoke to Paul a week before the start of the trial.

What are the latest developments with the campaign?

A lot has taken place in the last month or so, both in and out of the courtroom. The prosecution attempted to shut down the Jobstown Not Guilty campaign.

They went to court to try to seek an extension of our bail conditions – to prevent the defendants speaking about the case outside of court, speaking at all at an ‘assembly for justice’ that we organised a couple of weeks ago, to prevent any protest outside the court in the course of the trial. That was a very aggressive move by the prosecution.

We refused to give any of those undertakings. We mobilised public support, we exposed what was happening. In the end we simply gave a commitment not to speak about the case for three hours on Saturday during the assembly for justice. That was accepted and we were able to attend the assembly, which they had been trying to stop.

The event got a massive boost in terms of publicity because they attempted to shut it down. We appeared on stage gagged because of the attempt to silence us, before taking the gags off.

It was quite a phenomenal event where we had different campaigns represented that had faced state repression in Ireland and abroad. We packed out the main theatre and balcony in Liberty Hall – the historic trade union building in Ireland – and two overflow rooms.

There were over 700 people there in total. It was a really excellent event.

The other significant event inside the courtroom is the attempt of the prosecution to stack the jury against the defendants. They’re seeking to exclude from the jury anyone from Tallaght – an area of over 100,000 people, where the protest took place – or with connections to Tallaght.

And they’re seeking to exclude anyone who’s ever expressed views about water charges on social media or elsewhere. Again that’s quite an incredible restriction, because in theory this is a trial not about protesting against water charges, it’s a trial about a criminal act of false imprisonment.

Why someone who has an opinion on water charges couldn’t be impartial and determine whether someone had committed false imprisonment kind of gives the game away. It is about water charges, it is about austerity – what’s going to be on trial is opposition to austerity.

We are mobilising support against what they’re trying to do. An independent documentary has been released about the case. The jury restrictions will be discussed on the first day of court, and the judge will decide.

In advance of that we’re having what we hope will be a very substantial protest this Saturday 22 April, where we think we can mobilise thousands and thousands of people. The two key slogans will be ‘protest is not a crime’ and ‘don’t stack the jury against Jobstown.

And we’ve mobilised a lot of support from personalities, public figures and celebrities on the issue of the jury in particular as well.

What are likely to be the key points of debate in the courtroom?

The essence of our defence is going to be that protesting is not a crime. There’s a very fundamental difference between protesting, sit-down protests, slow marches and kidnapping, which is what we’re charged with.

At the core of the case is the fact that this was a protest. That people have a right to protest and what is being attempted here is to infringe on that right.

And then also to bring out the role of political policing. The defendants in the case are carefully chosen by the police. They chose to arrest and charge certain people for political reasons. So for example, they questioned two members of Solidarity (the electoral alliance the Socialist Party is part of, previously Anti-Austerity Alliance, AAA) who weren’t even at the protest, because they were candidates for AAA in the last local elections.

They targeted men in particular. Only two of all the defendants are women. And that’s because they wanted to portray the protest – wrongly – as an anti-woman, misogynistic protest, despite the fact that probably at least 50% of people on the protest were women.

We may also bring out how unprecedented these charges are. The state has always used the police to defend the interests of the rich, to prevent protest. But the use of a false imprisonment charge is a new departure for the Irish state, and new as far as we can see from anywhere across Europe.

So we’ll be able to bring out multiple examples from the past of where similar protests took place, politicians’ cars were delayed, and never before have there been any charges for false imprisonment. We’ll expose how this is a new departure, as a barrister in the children’s court case described, “a recipe for totalitarianism”.

And that’s it’s driven by a fear of the establishment of the growing movement against austerity, against water charges, and more generally on other issues as well.

What can people internationally do to support the campaign while the trial is ongoing?

International solidarity is really important, for two main reasons. The first is it’s an expression of support for the defendants who are facing a very serious attack on them and their families. Getting messages of support, seeing it trend on Twitter etc, is important for lifting morale. It lets them know that they’re not alone – that they’re backed by their community in Jobstown and Tallaght, the wider movement in Ireland, but also internationally.

And the second reason is to embarrass the Irish state. Imagine if this were happening elsewhere in the world – an opposition politician and a community who had protested against the government’s policies had engaged in very basic, peaceful civil disobedience and were then facing conviction, removal from parliament, and significant jail time.

Obviously, if the regime that was doing it was not in favour with Western imperialism generally, the condemnations would be coming thick and fast. Exposing that hypocrisy by having people condemning what is happening here internationally, speaking out about it, getting into the media internationally, it would be quite embarrassing for the Irish state.

When people look at it in any way objectively from further afield and see precisely what’s happening, they can talk about it in such terms that would be devastating for an Irish state that thinks it’s very democratic, defends civil liberties, etc.

So there will be an international day of protest where we’ll be calling on as many people as possible to protest outside Irish embassies and consulates or any other appropriate location. People taking pictures of crowds with Jobstown Not Guilty signs, using the hashtag #JobstownNotGuilty on social media. All of that is very useful.

We’re on 92 or 93 MPs and MEPs internationally who have supported the campaign. We want to get to the 100 mark in the course of the trial.

Also raising it within the trade union movement – passing resolutions and where possible raising finance – is particularly important because we think this is an attack on everybody’s right to protest, including the trade unions’ right to have effective pickets.