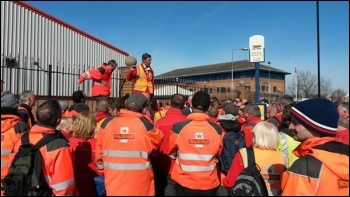 This year's Communication Workers Union (CWU) conference takes place against the backdrop of the latest wholesale attack by Royal Mail on its workers' pensions.

The company recently announced plans to close the current 'defined benefit' pension scheme in March 2018. Its plan is to put members into an inferior alternative, with no certainty of what members would earn - workers could lose up to a third of their future pensions.

The consultation with the CWU and postal workers has been swept aside as Royal Mail has seemed determined to undermine terms and conditions, pay and pensions since privatisation in October 2013.

The CWU has rightly spoken out condemning the possible imposition of these pension changes without agreement, But words need to be turned into action very quickly or postal workers stand to face a future of poverty in retirement.

Royal Mail claims it cannot afford to keep paying the current pension, even though it has found £650 million to pay shareholders dividends over the last three years.

It is pretty clear that Royal Mail has no intention of changing its objective of rewarding shareholders while punishing the workforce, so only a clear call to strike action will get Royal Mail to change course.

The need for coordinated action across all unions against the attack on our pensions and pay is stronger than ever. We have had enough of seeing the top 1% getting richer from hammering us into the ground.

The ongoing attempts by Ofcom and the government to deregulate and separate Openreach from the BT Group, combined with the increasing bullying, divide-and-rule tactics and lousy pay offers from BT management, demonstrate the need for a fighting programme of renationalisation of the telecommunication industry in conjunction with the battle to renationalise Royal Mail.

All motions making this call should be supported. And the CWU should demand Jeremy Corbyn support the call for nationalisation.

Over the last year many CWU members' local workplaces have continued to take 'unofficial' action against bullying and attacks on conditions in local workplaces. Only last month 240 postal delivery staff walked out in Doncaster and were joined later by up to 70 distribution and collection staff.

One of the Doncaster CWU union reps described the effect of the unofficial walkout: "Yesterday we were under their spell, today they're under ours. We've taken the power back".

This shows that action gets results and we urge conference to back all propositions committing the union to take action against the government's anti-trade union bill.

Royal Mail's announcement that it intends to close the defined benefit pension plan is just a part of a wider-reaching systematic attack on CWU members' terms and conditions of employment.

The scheme guarantees a pension based on average salary. Needless to say, Royal Mail wants to replace it with a less generous scheme, despite the scheme having assets of over £7.4 billion and it being in surplus.

Of course, there are those who have maintained and even improved their generous pension situations. Royal Mail chief executive officer Moya Greene had pension contributions of £200,000 as part of the £1.5 million she was paid in 2016.

The cause lies within the economic model which Royal Mail has now adopted. Since its privatisation, the company has moved from a public service to a capitalist organisation whose raison d'être is to provide profits for wealthy shareholders.

The CWU should take a leading role with other fighting trade unions, forcing the Trade Union Congress to coordinate industrial action across the whole trade union movement.