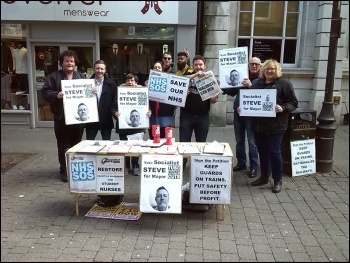 Early morning leaflet drop, over 500 flyers given out to council staff.

Martin, "I've been a keyboard warrior too long", joins us on his first campaign stall. In Bentley outside the local Tesco, store manager brings us mugs of tea and biscuits.

Mick, a postie, joins us on his day off for his first stall in Doncaster town centre. Phone call from Michael, who has resigned from the Labour Party after 40 years because of the Blairites, applied to join the Socialist Party and is attending our next meeting.

Rikki, who asked for more info on the TUSC website after getting a flyer, meets us to discuss getting involved - he's bringing two mates to the next Socialist Party meeting.