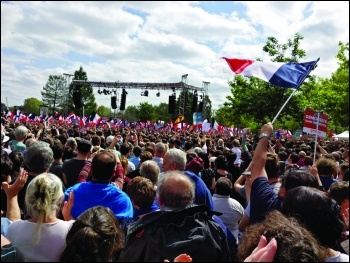 European capitalism is in crisis. It is failing to deliver the basic requirements for the working class on jobs, pay, pensions, housing, health and education. In this situation choices emerge on the right and left. Such is the case in France today.

The presidential election first round ballot takes place on 23 April. There are eleven candidates which in practice narrows down to four, two of whom will go through to a second ballot on 7 May.

Le Pen is almost certain to go through to the next round. Fillon has faltered, engulfed by a sea of financial scandals. Macron, who until a few weeks ago looked like a shoe-in, has been exposed as programmatically weak and he too has stalled. This leaves Mélenchon who, with a week to go, has developed momentum.

Enthusiasm for Mélenchon and his anti-austerity programme was evident at his rally in Toulouse, Prairie des Filtres, on 16 April. The 70,000-strong crowd included a large number of young people. There are parallels here with the Sanders and Corbyn campaigns.

Mélenchon's hour-long speech was punctuated throughout with cries from the crowd of "résistance" and, addressed to the liberal elite political class, "dégagez" (make way!)

Any mention of Le Pen, Fillon or Macron was greeted with a loud chorus of boos.

The rally concluded with a huge rendition of the French national anthem, La Marseillaise, accompanied by much waving of the tricolour.

This seemed to be a conscious act of reclamation of the symbols of the French Republic from Le Pen ("La reine de l'extrème droite" - queen of the far right) who has sought to appropriate these symbols as her own.

Mélenchon's social programme is a solid set of radical reforms. But there is a weakness in his overall programme and that is the economy. Proposed measures like 100% tax on annual earnings of over €400,000 will, if implemented, go some way towards financing his reforms, eg increased minimum wage and a retirement age of 60 with pension of €1,000 a month.

But bringing down the scandalously high unemployment levels, especially among the youth, will require the planned use of resources, which in turn poses issues of control and ownership of capital.

Moves in this direction, even his limited bank nationalisation programme, will bring Mélenchon into direct conflict with French business interests. Is he really prepared to take the French capitalist class head on?

It's anybody's guess which of the four principal candidates will go through to the second ballot. But Mélenchon is in with a good chance - the momentum is with him.