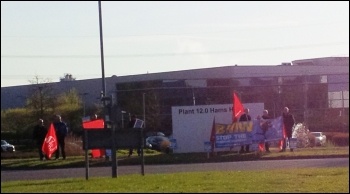 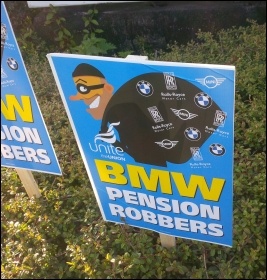 On 19 April, workers at BMW's engine plant in Coleshill, Warwickshire, held the first of five separate 24-hour strikes against changes to their pension scheme. Part of the first national strike by BMW workers in the UK, the stoppage was called by Unite the Union after a massive 93% yes vote by 72% of workers.

The company is trying to force through a change from a final salary pension scheme (based on workers' contributions) to a defined benefit scheme (leaving retirement income at the mercy of stock market fluctuations).

There was a determined mood among those on the picket line to fight back, with one striker saying: "You plan out what you think you'll need for your retirement, and keep putting towards your pension pot, and then suddenly the company turns round and says you might not be getting what you thought you would. It's a disgrace".

Reports from inside the plants suggest that some sections were closed entirely, with managers desperately looking for qualified staff to keep production going on others.

National Shop Steward Network supporters from Bristol and Gloucestershire joined pickets at the BMW's Swindon plant on 19 April. The pensions dispute takes place despite BMW promising to keep the scheme open to existing members when it was closed to new employees four years ago. Pickets were in a determined mood.