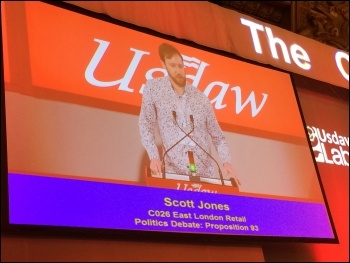 Scott Jones speaking at Usdaw conference, May 2017, photo by Isai   (Click to enlarge)

"It's great to have a Labour Party leader in Jeremy Corbyn who condemns former BHS boss Phillip Green and tells him to be scared, as opposed to knighting him as Tony Blair did in 2006," I told the annual delegate meeting (ADM) of Usdaw, the shop and distribution workers' union, in Blackpool on 2 May.

I moved a proposition in support of mandatory reselection of Labour MPs which was narrowly lost but, despite being opposed by the union leadership, was supported by most speakers. Delegates, including Labour parlimentary candidates past and present queued up to speak in support of it.

We pointed out that Corbyn can win with socialist policies but some MPs are undermining him in the most important general election in a generation.

On the same stage Labour deputy leader Tom Watson had just been challenged by Socialist Party member Isai Priya on why Tony Blair is still in Labour after calling for a Tory vote, to massive applause. Watson was heckled with a call to "support your leader".

The Usdaw leadership tried to stifle debate by asking branches to withdraw propositions they opposed, This included on reselection by East London branch which we refused to withdraw.

But the leadership did encounter some fiery opposition. The conference literally kicked off with a former Usdaw employee unfurling a banner saying "Respect your workers" in the conference hall before being bundled out.

And a Scottish delegate tried to refer back the entire agenda after it emerged Usdaw had blocked discussion on nine emergency propositions on the issue of a Scottish referendum.

This tone continued when two delegates called for general secretary John Hannett to announce his impending retirement at the same time as the 2018 presidential and executive committee elections to save the union money, which he refused to comment on.

Socialist Party members spoke in debates on the living wage, fighting racism, the nationalisation of failing retail companies and the battle to support Jeremy Corbyn and his ideas in Labour.

Our fringe meeting discussed these issues and the upcoming union elections with our biggest ever attendance. We sold 99 copies of the Socialist and many copies of the Usdaw Activist pamphlet.