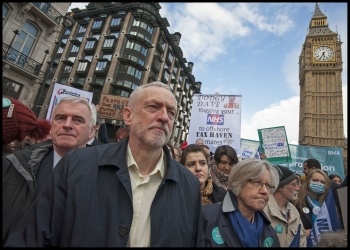 Jon Ashworth, Labour's shadow health secretary, recently visited Batley in Yorkshire to announce that Labour will suspend both the 'STP' cuts programme and planned A&E closures across the country. They will then be subject to a 'review' to assess their impact.

In addition, Ashworth has pledged to "give the NHS the funding it needs," give NHS staff decent pay, and restore bursaries for student nurses.

These announcements are good, and go some way to addressing the chronic underfunding of the NHS. However, a clear pledge to scrap these cuts, not just pause them, would be better.

If the Tories win the election, the NHS faces a yearly funding gap of £22 billion by 2020. Inevitably this will lead to an escalation of cuts, closures, and privatisation.

Labour has not yet announced the exact funding allocation for the NHS, but activists from the campaign to save Huddersfield Royal Infirmary's A&E were present at the press conference to ensure they keep to their promises.

Under previous Labour governments, funding has been cut and privatisation pursued by Blairite ministers. However, if these commitments are kept to, and Corbyn campaigns hard on the NHS as a central issue, he could romp home against the Tories.

The future of our NHS hangs in the balance and we must step up our demands on Labour to publish a radical manifesto that can lead to real policy changes.

Our local campaign continues to go from strength to strength and many of us are now out in force with our own #VoteNHS manifesto.

This calls on all politicians to go further than Ashworth - by also demanding the scrapping of 'PFI' privatisation debts; full funding for social care; bringing the drug companies into public ownership; and kicking private agencies out of the NHS.

Corbyn must include these in his programme for the NHS to really point the way out. Time to save our health service - say no to cuts, closures and privatisation!