Fight for jobs, pay and services 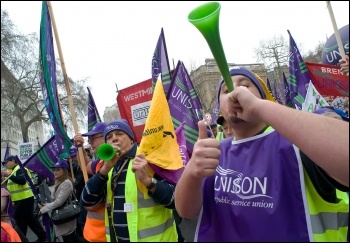 If Corbyn and the unions mobilise workers, he can win the general election, photo by Paul Mattsson   (Click to enlarge)

"The Conservative Party has always been the true party of workers," claims Theresa May. What a joke! Try telling that to the millions of workers living on poverty pay, in precarious employment.

Tell it to the nurses who outrageously can't afford to feed themselves without help from food banks. Tell it to the public sector workers whose pay has been 'capped' (ie cut) for over a decade!

May will certainly encounter scepticism in promising to improve workers' rights, given the Conservative Party's record of attacking them.

Labour says the public sector pay cap will be lifted and the minimum wage will be raised to a living wage - at least £10 an hour by 2020. And the most effective way to maintain good rights at work is through a trade union, so a repeal of the restrictive Trade Union Act will be welcomed.

As socialists we recognise the limitations of some of these demands, like the delay in implementing the £10 an hour minimum wage, but overall it's a positive start.

The public enthusiasm with which these policies has been greeted has prompted Theresa May to cynically mimic Corbyn's pro-worker stance. Her "new deal," however, offers very little to workers, and does not stand up to scrutiny.

A Tory commitment to increase the national living wage will only benefit the over 25's. The introduction of statutory rights to unpaid leave for carers will not be a financially viable option for many, and is an insulting alternative to investment in social care (from which billions of pounds has been cut).

May's promise to safeguard workers' rights is meaningless, as there is no plan to get rid of tribunal fees and scrap anti-union laws.

Come 8 June the choice that will benefit workers is clear - we must get the Tories out! A Corbyn-led government would be a huge step forward, which we then need to build on. It would provide an opportunity to workers, mobilising through their trade unions, to win better pay and conditions.