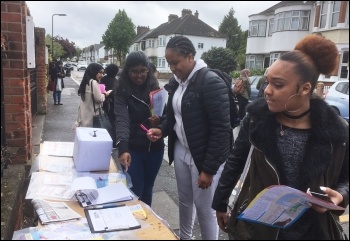 Jeremy Corbyn's manifesto has been greeted with enormous enthusiasm by working class people but especially by young people.

The manifesto represents a substantial break with the false 'choice' that has been presented by mainstream political parties at all the previous elections young people are able to remember. Instead of the uninspiring offer of 'Tory-proper v Tory-lite', we are instead being given an opportunity of a break with the failed politics of austerity - the chance to vote for an alternative.

There should be huge meetings at schools, colleges and universities, and demonstrations to show support for policies like free education. That's why wherever we are present, Socialist Students is organising to do just that.

As young people, we need to seize this opportunity to help build and mobilise a mass movement - a movement that will not stop when the election results are announced on 9 June.

It means that we must be ready to fight for Corbyn to go beyond this good but still limited manifesto - not only abolishing tuition fees but writing off student debt and introducing universal living grants, for example.

Socialist Students has had a fantastic response to our ideas at colleges and universities. At one college in Waltham Forest, students voted overwhelmingly (96%) to back Jeremy Corbyn and his policies over Theresa May's fee hikes and austerity.