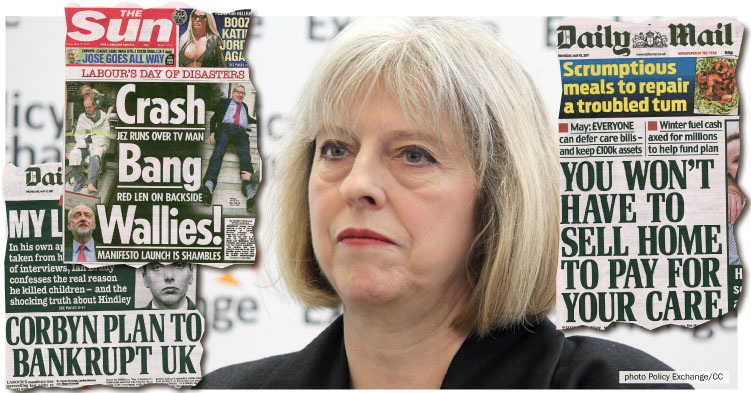 Complain to the BBC over bias 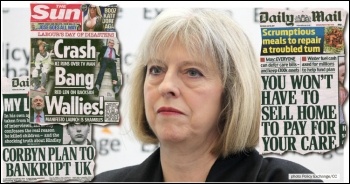 The media, May and the general election   (Click to enlarge: opens in new window)

Theresa May gambled on a snap election to turn her weak position into a mandate to carry through a Brexit in the interests of the billionaire bosses and the bankers. She believed that her support in the establishment media, firmly in the grip of the undemocratic pro-capitalist and therefore anti-Corbyn forces, would provide a guaranteed platform for her Lynton Crosby-inspired “strong and stable” mantra with no questions asked. And for a while it appeared to be working.

But the Tory manifesto, especially their vicious ‘dementia tax’, penalising those who need more care in old age, makes it abundantly clear that they are still the Nasty Party. Tory MPs described it as a “turkey” on the doorsteps. By Monday Theresa May was making a messy retreat.

Andrew Neil, when interviewing Theresa May, asked if this was the first manifesto pledge to be broken before an election has even taken place. Can we hope for a more robust questioning of the Tories on the BBC and other establishment media? Don’t hold your breath.

May has gambled this election on the narrative that she is a firm and strong pair of hands, but the U-turn shows that the manifesto is not worth the paper it’s written on, and what’s more she and the Tories are weak and unstable. But the establishment media have gone along with her story wholeheartedly, often just repeating these claims as fact.

Loughborough University has found national newspapers to be overwhelmingly negative in their coverage of Labour.

Letters pages are the last thin hope for an alternative viewpoint. “We are not asking for eulogies of Corbyn, but for reporting that takes seriously the proposals contained in the manifesto,” wrote 67 media academics to the Guardian.

Another letter tried to expose the use of polls, which discount the opinions of working class and young people, which are used to set the news agenda.

Meanwhile the Institute of Fiscal Studies is often quoted and presented as a neutral reliable bearer of truth. Who is it? It started, according to the Guardian, when a tax consultant, an investment manager, a stockbroker and a banker came together in “collective disgruntlement at the introduction of corporation tax by James Callaghan” in 1965.

So, despite occasional criticisms of the capitalist politicians, this is not an organisation that can be relied on by the working class to defend our interests.

But Corbyn’s manifesto, which includes measures such as abolishing university fees, public ownership and banning zero-hour contracts, is enormously popular. The 18 percentage point lead May was betting on has been cut in half in some polls, suspicions withstanding.

A hunger for an alternative to austerity, privatisation and inequality exists. Socialist Party members met people over the weekend reporting that they were switching from voting Tory to backing Corbyn. But this is not expressed on the BBC.

The real questions to be asked would be about how the Tories can claim they will create a strong and stable economy when the opposite is the case.

In reality growth is stagnant, wages are actually falling in real terms and a £1.5 trillion consumer debt mountain teeters unsteadily bearing down on us.

The Tory claim to be a ‘workers’ party’ is bunkum but is not really challenged. A record 60% of the poor are in working families. The Bank of England estimates that the share of national income paid in wages is 53%, down from 65% in the 1980s with a five percentage point drop in the last decade.

The capitalist-owned media and the BBC will not pursue these questions. The answers would reinforce the growing understanding that we live in a “rigged system set up by the wealth extractors, for the wealth extractors” as Jeremy Corbyn has correctly pointed out. However, this election is contributing to the correct understanding that the media is very much a part of that rigged system.

We need to campaign for a genuinely free media that is neither under big business control nor state control. In a socialist society the means of communication, publicly owned, should be open for everyone – with their parameters discussed and decided democratically, involving the widest possible number of people.

We cannot manage that before 8 June but why not take a few moments to let the BBC, supported by our licence fees, know how you feel about its bias. The complaints process is tedious and designed to put you off. The Socialist Party will post a model complaint on our website for use taking up specific examples of bias that can be used to assist online or phone complaints. Here are the details:

Complain to the BBC about bias in the 2017 general election

Both the above numbers are 24 hours, charged as 01/02 geographic numbers

A model complaint text has been drafted if you choose to use it:

This is part of a general trend within the BBC which has clearly adopted an anti-Corbyn and pro-Tory position from the start of the election. The BBC is denying any serious debate on the issues and policies before us in this election. The BBC works, in the main, within a general and limited framework; which is to accept that austerity is a necessity and to deny the trade unions, working class and young people a voice to challenge that idea. This means that millions of licence payers who support Jeremy Corbyn’s manifesto pledges are not represented.

Some useful Twitter handles for tweeting about instances of pro-Tory, anti-Corbyn bias

@BBCr4today ‏(Monday to Saturday mornings 6-9am)

@EvanHD (presenter on Radio 4 Today programme and Newsnight, previously worked for Thatcher as an architect of the poll tax)