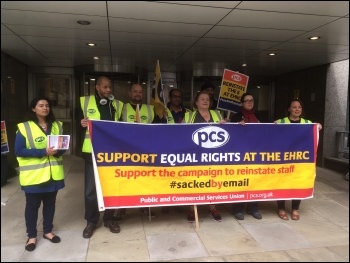 PCS members at the Equality and Human Rights Commission (EHRC) HQ in London are on strike as part of a month of national rolling action. They were in a confident mood at the start of a week-long strike.

Unlike some picket lines where there's a lot of passing traffic and pedestrians, this one is a bit tucked out of the way. But there's a building site right next to the picket line. One builder told strikers: "We read about you in the Metro - sacked by email! That's disgusting, especially from the Human Rights Commission!"

One striker told the Socialist: "The commission was going through a restructure and part of that involved cuts to save money. When the restructure began they wanted savings of £658,000 but at the same time created three new management posts on over £600,000 a year.

"On the picket line in February, nine union members were sacked by email. They were given one day's notice and banned from entering the office. It's shocking given the commission is supposed to be concerned about human rights. They originally wanted to reduce the headcount by 28. Lots left voluntarily and now there are 48 vacancies, yet the commission is refusing to reinstate union members!

"We want them to lift the office ban, put some real effort in to redeploy people, and give them effective support to find alternative employment elsewhere if they can't get jobs here. So we're now taking four weeks of action, one week in each office round the country. Glasgow last week, London this week, then Cardiff, then Manchester."

Strikers commented that it is good that defending the EHRC is in Jeremy Corbyn's manifesto and hope that if he wins they will stop this attack. But they are prepared to fight on in any case.